The S&P 500 rose 0.3% after bouncing between small gains and losses. The benchmark index eked out a slight gain for the week, it’s third straight amid lingering concerns about high inflation, higher interest rates from the Federal Reserve and the economic effects of the war in Ukraine.

The sharpest action was again in the bond market, where the yield on the two-year Treasury approached its highest level in more than three years.

Yields jumped after a U.S. government report showed employers added 431,000 jobs last month. That was slightly below economists’ expectations for 477,500, but the report also revised earlier months’ data to reflect more strength. It showed raises for workers accelerated last month but at a slower pace than overall inflation, while the unemployment rate improved to 3.6% from 3.7%.

A separate report showed that U.S. manufacturing is continuing to grow, though at a slower rate than in February.

A strong jobs market and economy give the Federal Reserve more leeway to raise interest rates sharply in order to beat down the high inflation that’s sweeping the country. The Fed has already raised its key overnight rate once, the first such increase since 2018. Following Friday’s jobs report, traders increased bets that the Fed will raise rates at its next meeting by double the usual amount.

Such expectations drive shorter-term Treasury yields in particular, and the two-year yield leaped to 2.45% from 2.28% late Thursday.

Such a flip of the usual relationship between two- and 10-year yields has preceded many recessions in the past, though it hasn’t been a perfect predictor. Some market watchers caution the signal may be less accurate this time, because of distortions in yields caused by extraordinary measures by the Federal Reserve and other central banks to keep interest rates low.

Shares in more than 65% of the companies in the benchmark S&P 500 rose, with health care and communications stocks making up a big share of the gains. A slide in industrial, technology and financial stocks kept the index’s gains in check.

Shares of GameStop initially rose sharply after it said it plans to split its stock, pending approval from shareholders for an increase in the number of its authorized shares. Such splits can bring down the price of a share of stock, potentially putting it in reach of more smaller-pocketed investors. The stock shed its gains, however, and closed 0.9% lower.

GameStop’s stock has more than doubled since sitting at $78.11 in mid-March. But it’s still well below the $483 peak reached in early 2021 amid the “meme stock” craze. Then, bands of smaller-pocketed investors joined together to pump prices to levels seen as irrational by many professional investors.

In overseas markets, European stocks were modestly higher despite a report showing consumer prices in the 19 countries that use the euro currency rose by an annual rate of 7.5% in March, the fifth straight monthly record.

Oil and gas prices had already been rising because of increasing demand from economies recovering from the depths of the COVID-19 pandemic. They jumped higher after Russia, a major oil and gas producer, invaded Ukraine, on fears that sanctions and export restrictions could crimp supplies.

Crude prices slipped modestly on Friday, with a barrel of U.S. oil dipping 1% to settle at $99.27. Early last month, when disruptions to crude supplies were at their height, it briefly touched $130. 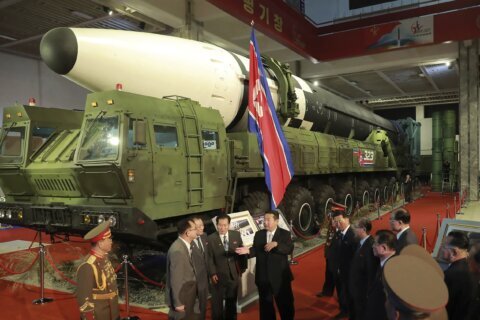