Worth about $1 billion in Australian dollars, the deal will see South Korean defense company Hanwha provide the Australian army with artillery weapons, supply vehicles and radars.

The defense contract is the largest struck between Australia and an Asian nation, and comes at a time of heightened tensions between Australia and China. Australia recently announced a deal to build nuclear-powered submarines in a partnership with the U.S. and Britain — a move that China has strongly condemned.

Moon met with Australian Prime Minister Scott Morrison during his visit, and the two leaders agreed to upgrade the formal ties between their nations to a “comprehensive strategic partnership.”

The leaders also said they would work together on developing clean energy technologies, including hydrogen, and on facilitating the supply of critical minerals, which Australia has in abundance.

Morrison said the new defense contract would create about 300 jobs in Australia, where a division of Hanwha operates.

“The contract that we have signed today, I think, speaks volumes about what we believe are the capabilities of the Korean defense industry,” Morrison said.

Moon said South Korea had similar values to Australia when it came to its geopolitical outlook, but also that its relationship with China was important, particularly when it came to pursuing peace with North Korea.

“Therefore, South Korea is focused on the steadfast alliance with the U.S. and also with China,” Moon said. “We want a harmonized relationship.”

Australian Defense Minister Peter Dutton said his government was committed to keeping the region safe and the new contract would help modernize the Australian army.

“The prime ability of the new vehicles is to fire and move quickly, avoiding enemy counterattack,” Dutton said. “This project will mean a significant increase in the level of firepower and security for Australian artillery capability.”

South Korea is Australia’s fourth-largest trading partner and fourth-largest export market under a free trade agreement that has been in force since 2014. This year marks the 60th anniversary of diplomatic ties between the two countries.

Moon said South Korea wasn’t considering joining the boycott of the Winter Olympics and that Seoul hadn’t received any requests from the U.S. to not send its officials. He said China had a crucial role in stabilizing peace and resolving the nuclear standoff with North Korea, which counts Beijing as its only major ally and economic lifeline.

Moon has called for a potential four-way declaration between the Koreas, the United States and China to formally end the Korean War, which stopped on an armistice and without a peace treaty, to help break a deadlock in nuclear talks with the North.

But he said Monday that North Korea was holding up that process because it was demanding an end to U.S. hostilities first.

“And because of that, we are not able to sit down for a discussion, a negotiation, on the declarations between South and North Korea, and those between North Korea and United States,” Moon said. “And we hope that talks will be initiated. We are making efforts towards that.”

South Korean officials had seen the Beijing Games as a potential stage for such a declaration, but the U.S.-led boycott seems to have dashed such hopes. Australia, Canada, and Britain have said they will join the diplomatic boycott of the games in protest of China’s human rights record.

In Beijing, Foreign Ministry spokesperson Wang Wenbin criticized Australia over its attempts to boost its defenses, at a daily briefing.

Wang accused Australia of “trying to divert attention, draw ideological lines and set up imaginary enemies in the name of democracy and freedom.” 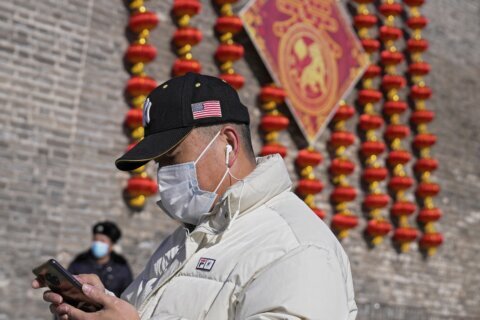 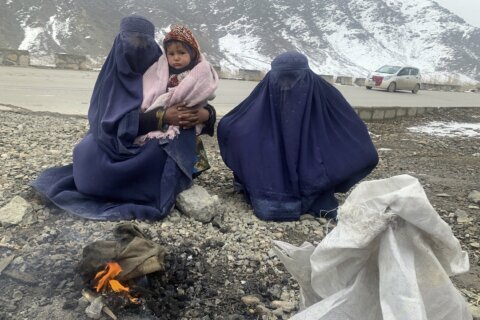 In freezing Afghanistan, aid workers rush to save millions