A divided U.N. Security Council pressed the Taliban on Monday to live up to pledges to let people leave Afghanistan after the U.S. withdrew its forces, but China and Russia refused to back the resolution, which they portrayed as diverting blame for chaos surrounding the U.S. pullout.

“The eyes of all Afghans are watching this council, and they expect clear support from the international community. And this lack of unity is a disappointment for us and for them,” French Deputy Ambassador Nathalie Broadhurst said after the vote, in which Russia and China abstained.

The vote came shortly before the U.S. moved its last troops out of Afghanistan, ending America’s longest war, and four days after a suicide bombing at the Kabul airport gate killed at least 169 Afghans and 13 U.S. service members. The bombing has been blamed on an Islamic State group affiliate.

“We cannot airlift an entire country to safety. This is the moment where diplomacy has to step up,” U.S. Ambassador Linda Thomas-Greenfield said after the vote.

But Chinese Deputy Ambassador Geng Shuang said the U.S. and its allies have left behind a “huge catastrophe they have created while shifting the blame and responsibility to Afghans’ neighboring countries and the Security Council.”

French President Emmanuel Macron said Sunday that the resolution would propose a U.N.-controlled “safe zone” in Kabul for humanitarian operations. But the resolution ultimately called instead for “all parties to allow full, safe, and unhindered access” for aid groups.

U.N. diplomats, speaking on condition of anonymity to discuss private conversations, said the resolution involved some compromises but made key points about permitting aid and travel.

The council “expects that the Taliban will adhere to” commitments about letting Afghans and foreigners depart safely, the resolution says.

The Taliban have said they will allow normal travel after assuming control of the Kabul airport following the U.S. withdrawal, and the U.S. and about 100 other nations said in a statement Sunday that the militants had given assurances that people with travel documents would still be able to leave.

China echoed some of Russia’s concerns and criticized the U.S. for civilian casualties in a drone strike that American officials said hit a vehicle carrying multiple Islamic State suicide bombers.

Britain’s Woodward called the resolution a “first response,” noting that the council does have the leverage to lift existing sanctions or expand them.

Meanwhile, the U.N. children’s arm said Monday that it was working to reunite dozens of children and parents separated during the massive, hasty airlift ahead of the U.S. withdrawal.

UNICEF brought seven children back to their parents in Kabul on Saturday and has traced the parents of roughly 70 more children to other countries, said Herve De Lys, UNICEF’s representative in Afghanistan.

Because of conflict, drought and other problems, about 10 million children now need humanitarian aid in Afghanistan, De Lys said. 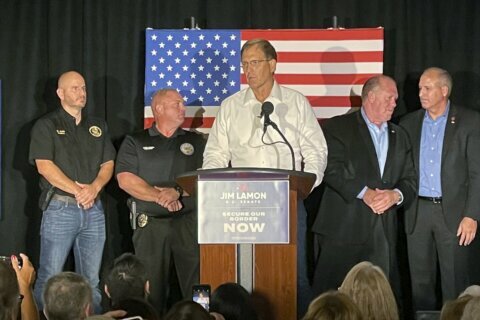