Stocks rally to records amid relief rates will remain low

Wall Street is rallying Friday after the head of the Federal Reserve said it's still far from pulling interest rates off the record low that's helped the market soar, even if it does begin dialing back its support for the economy later this year.
Listen now to WTOP News WTOP.com | Alexa | Google Home | WTOP App | 103.5 FM

NEW YORK (AP) — Wall Street rallied to records on Friday after the head of the Federal Reserve said it’s still far from pulling interest rates off the record low that’s helped markets soar, even if it does begin dialing back its support for the economy later this year.

Stocks have set record after record this year thanks in large part to the Federal Reserve’s massive efforts to prop up the economy and financial markets. But the gains had grown more tentative as the beginning of the end of the Fed’s assistance came into sight, now that the unemployment rate has dropped and inflation has picked up.

In a speech that investors have had circled for weeks, Fed Chair Jerome Powell said that the economy has met one big milestone the central bank had set to slow the $120 billion in bond purchases it’s making each month. That could mean a paring back by the end of the year of the purchases, which are meant to keep longer-term interest rates low and to juice the economy.

But Powell also cited past mistakes where policy makers made premature moves in the face of seemingly high inflation, stressing again that today’s high inflation looks to be only temporary. He also made clear that a slowing of the Fed’s bond purchases doesn’t mean a rise in short-term rates is imminent. That would require the job market and inflation to hurdle “substantially more stringent” tests.

“We have much ground to cover to reach maximum employment,” Powell said.

At the end of Powell’s speech, many investors took it as a sign the Fed will keep supporting the market with low interest rates, which can act like steroids for stocks. In the lingo of Wall Street, it was “dovish” in tone rather than “hawkish,” which would have advocated for a quicker rise in rates.

“He not as much spoke it as he cooed it,” said Ernesto Ramos, U.S. chief investment officer at BMO Global Asset Management. “He was super dovish.”

Stocks of companies whose profits are most closely tied to the economy made the biggest gains following the speech. Smaller companies were particularly strong, with the small-cap Russell 2000 index up 2.9%, more than triple the gain for the big stocks in the S&P 500. They often do best when investors feel more optimistic about lower rates and a stronger economy.

“Markets are loving it,” Ramos said. But he also cautioned that the longer ultralow interest-rate policy helps to prop up the markets, the withdrawal may be worse once it’s finally exhausted.

“It strengthens our view that markets will continue to do well this year,” he said. But “when the accommodation is fully removed, how bad of a hangover will it be? Just like a party, the hangover is less bad if you leave earlier.”

Treasury yields were lower, but only after some swings. After sitting at 1.35% shortly before Powell’s speech, the yield on the 10-year Treasury sank as Powell cited past instances where policy makers prematurely raised interest rates on worries about short-term bursts in inflation, saying “such a mistake could be particularly harmful” now.

Yields later recovered a bit of their drops after Powell said “substantial further progress” has been made on its inflation goals, one of the two milestones needed for the Fed to slow its bond purchases. The other, which focuses on employment, has shown progress, but Powell did not say it had been fulfilled.

Of course, Powell also said that the delta variant of the coronavirus is complicating things, though he still expects improvements to continue.

The faster-spreading delta variant has already slowed some economic activity. A report on Friday showed that consumer spending in the country rose 0.3% in July from June, a sharp slowdown from the prior month’s 1.1% jump. That’s a big deal when consumer spending is the driving force of the U.S. economy, and its growth slowed even though income growth for Americans accelerated to 1.1% last month.

The report also showed that a gauge of year-over-year inflation preferred by the Fed held steady at 3.6% in July, slightly higher than economists expected.

The next date circled on investors’ calendars is in a week, when the government reports how many people businesses hired in August. A strong report could give the Fed even more leeway to begin slowing its bond purchases.

Producers of commodities made the stock market’s biggest jumps as lower yields and a weakening dollar pushed up prices for oil, gold and other raw materials.

Occidental Petroleum leaped 6.9% for the largest gain in the S&P 500, and miner Freeport-McMoRan rose 5.9%.

On the losing end was Peloton Interactive, which tumbled 8.5%. It reported a loss for its latest quarter, cut the price of its most popular product and disclosed that it’s been subpoenaed by the Justice Department and the Department of Homeland Security for documents related to its reporting of injuries associated with its exercise equipment. 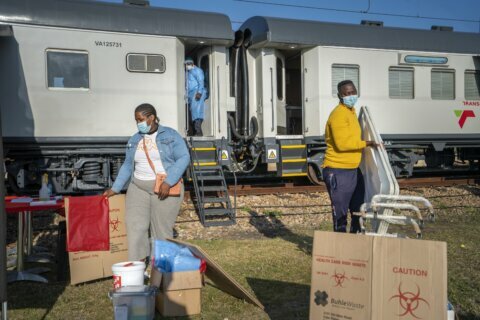 The Latest: NY governor ready to use reservists in shortage 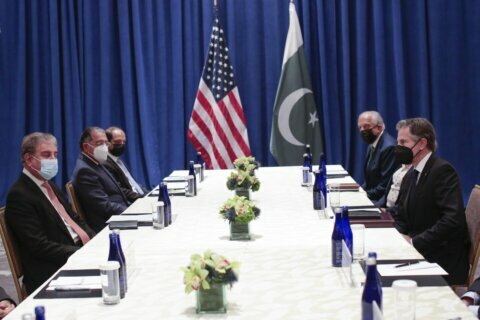