SEOUL, South Korea (AP) — South Korea on Wednesday reported 1,212 new cases, a steep rise in coronavirus infections unseen since the winter outbreak as it slips into another surge while most of its people are still unvaccinated.

Health experts say the government sent the wrong message by pushing for a premature easing of social distancing.

Packed restaurants, bars and stores and huge beer-drinking crowds at parks alongside Seoul’s Han River in recent weeks have illustrated how the country has let its guard down despite a slow vaccine rollout.

“This is an emergency situation where we need to invest all our abilities to respond to COVID-19,” Kim said, while pleading for public vigilance.

The government had planned to raise the cap on private gatherings from four to six people, extend indoor dining at restaurants by two hours until midnight and allow vaccinated people to go without masks starting this month. But officials in Seoul and nearby areas held off the new rules as infections rose.

More than 1,000 of the new cases came from the greater capital area, home to half of the country’s 51 million people, including a record 577 in Seoul. Infections were also reported in other major cities and regions, fueling concerns the virus could spread further during the summer holidays.

While infections among people in their 60s and older have slowed following vaccinations, transmissions are accelerating across other age groups, including those in their 20s and 30s who are more likely to go out socializing, said Lee Ki-Il, deputy minister of health care policy at South Korea’s Health Ministry.

“The number of virus patients is increasing very fast in metropolitan areas where there is a high concentration of bars and other entertainment venues young people often go to,” he said.

Lee also expressed concern over the spread of the more contagious delta variant of the virus. He advised tests for young adults who recently visited Seoul’s major entertainment districts, including Gangnam and Hongdae, regardless of whether they are exhibiting symptoms. He urged companies to have more employees work from home.

The government plans to add at least 25 more testing stations in Seoul and tighten the enforcement of restrictions at restaurants and other businesses, which from Thursday will face 10-day closures if they fail to implement distancing and other measures.

When asked whether the government worsened the outbreak by signaling an easing of social distancing rules, Son Young-rae, another Health Ministry official, said it’s hard to ignore the pandemic fatigue and the struggles of small businesses and the self-employed who rely on a battered service sector economy.

“We need to keep trying to find a balance between anti-virus measures and efforts to restore normalcy as the COVID-19 crisis prolongs,” Son said. “We have maintained that people should remain vigilant throughout this process … but considering the current surge in infections, there’s regret that we should have communicated that message more effectively.”

Only 30% of its population have received first doses as of Wednesday. Just around 10% have got both jabs.

Those vaccinated include hospital and essential workers, people in long-term care settings, troops and adults in their 60s or older, but inconsistent supplies have left the vast majority of younger adults still waiting.

South Korea on Wednesday received 700,000 Pfizer shots from Israel in exchange for a future shipment of vaccines to Israel from September to November, when officials hope South Korea’s shortage will have eased.

Korea Disease Control and Prevention Agency Director Jung Eun-kyeong said the doses will go to Seoul and nearby Gyeonggi province where the virus is spreading fastest. She expressed hope the shots will help speed up vaccinations of nursery, day care workers and kindergarten and elementary schoolteachers, which authorities plan to start this month. 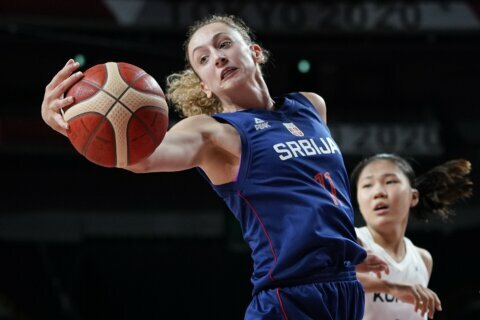