No. 2 US diplomat Sherman to visit China as tensions soar

WASHINGTON (AP) — Deputy Secretary of State Wendy Sherman will travel to China this weekend on a visit that comes as tensions between Washington and Beijing soar on multiple fronts, the State Department said Wednesday.

Sherman will meet Chinese Foreign Minister Wang Yi and others in the northeastern city of Tianjin on Sunday as part of her current trip to Asia, which also is taking her to Japan, South Korea and Mongolia. She’ll later visit Oman.

China’s Foreign Ministry said that Sherman would “hold talks” with Xie Feng, a vice minister in charge of China-U.S. relations, and “meet” with Wang later.

“China will make clear … its determination to safeguard its sovereignty, security and development interests and demand that the U.S. stop interfering in China’s internal affairs,” the ministry said on its WeChat social media channel.

Sherman will be the highest-ranking U.S. official to visit China since President Joe Biden took office, though Secretary of State Antony Blinken and national security adviser Jake Sullivan met Wang and veteran Chinese diplomat Yang Jiechi in Anchorage, Alaska, in March for what proved to be a contentious first exchange. John Kerry, the Biden administration’s special climate envoy, traveled to Shanghai for meetings with his Chinese counterpart in April, but Sherman now outranks him.

Sherman’s visit to China follows a significant deterioration in already badly strained U.S.-China ties in just the past two weeks, and there had been questions about why the trip was not announced at the same time as the rest of her travel to the region.

Senior U.S. officials would not confirm suggestions that the Chinese had initially offered only lower-level officials for Sherman to meet. But they said the Biden administration would not have agreed to the visit unless they were assured Sherman would be able to see top-ranking officials in person. The officials were not authorized to preview the trip publicly ahead of Wednesday’s formal announcement and spoke on the condition of anonymity.

The State Department said the administration was “exploring opportunities” to engage face to face with Chinese officials at senior levels.

“These discussions are part of ongoing U.S. efforts to hold candid exchanges with PRC officials to advance U.S. interests and values and to responsibly manage the relationship,” the department said in a statement, referring to the People’s Republic of China. “The Deputy Secretary will discuss areas where we have serious concerns about PRC actions, as well as areas where our interests align.”

The officials said Sherman’s agenda would be wide-ranging and cover areas of contention as well as a smaller set of areas of convergence, such as a mutual desire to bring North Korea back to the negotiating table for nuclear talks. But they allowed that the differences are vast and stark and likely to occupy most of the discussion.

On Monday, the administration accused China of being behind a massive hack of Microsoft Exchange email server software and indicted four Chinese nationals on charges they tried to steal U.S. trade secrets, technology and disease research. China rejected the hacking accusation and demanded that Washington drop the charges against its citizens.

Last week, the U.S. issued separate stark warnings against transactions with entities that operate in China’s western Xinjiang region, where China is accused of repressing Uyghur Muslims and other minorities. The administration also advised American firms of the deteriorating investment and commercial environment in Hong Kong, where China has been cracking down on democratic freedoms it had pledged to respect in the former British colony.

At the same time, the administration reaffirmed a Trump-era policy shift that rejects nearly all of China’s significant maritime claims in the South China Sea and reminded Beijing that any military move against the Philippines in disputed areas would trigger a response under a U.S.-Philippines mutual defense treaty.

U.S.-China relations have also been aggravated by China’s increasing threats toward Taiwan and its policies in Tibet.

Those issues, all carried over from the Trump administration, came on top of persistent tensions over China’s handling of the coronavirus pandemic, which originated in the city of Wuhan, and concerns about predatory Chinese investment in the developing world and its attempts to gain supremacy in the global high-tech telecommunications sector.

Sherman, after meeting with the Chinese officials, will travel on July 27 to Oman, which has been racked with protests over its floundering economy and mass layoffs and has been hit hard by the coronavirus. She’ll meet with Deputy Foreign Minister Sheikh Khalifa Al Harthy to discuss “advancing peace and security in the region and our shared commitment to bolstering the U.S.- Oman bilateral relationship,” the State Department said. 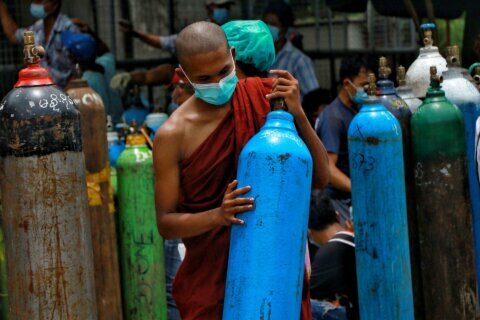 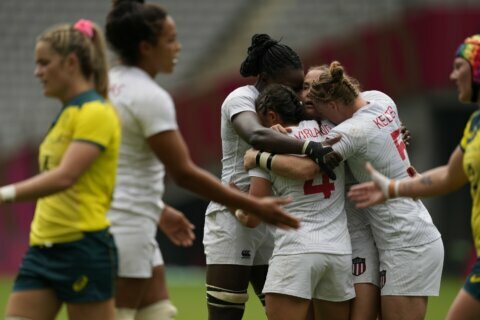 Aussies, US and Canada out; NZ survives Day 2 in rugby 7s