Big day for Dressel, Chinese in pool, Lee in gymnastics

After the biggest action of the day session on Day 6 of the Tokyo Olympics came at the pool, Lee shined at night in gymnastics with teammate Simone Biles watching from the stands.

Lee became the fifth straight American woman to claim the Olympic title in the women’s all-around. She edged Rebeca Andrade of Brazil in an entertaining and hotly contested final.

Lee’s total of 57.433 points was just enough to top Andrade. The Brazilian earned the first gymnastics all-around medal by a Latin American athlete but missed out on gold when she stepped out of bounds twice during her floor routine.

Dressel, America’s successor to Michael Phelps, won the 100-meter freestyle in an Olympic record of 47.02 seconds — a mere six-hundredths ahead of defending champion Kyle Chalmers of Australia. That gave him a fourth career gold medal, with three previous ones coming in relays.

“It is a lot different. I guess I thought it would be, I just didn’t want to admit to it,” he said. “It’s a lot tougher. You have to rely on yourself, there’s no one to bail you out.”

The most dramatic race of the day came when China surprised the U.S. and Australia with a world-record performance in the women’s 4×200-meter freestyle relay.

Katie Ledecky took the anchor leg for the Americans in third place, nearly 2 seconds behind the Chinese and also trailing the Aussies.

Ledecky passed Australia’s Leah Neale and closed the gap significant on China’s Li Bingjie, but couldn’t quite catch her at the end.

Li touched in a world-record 7 minutes, 40.33 seconds. She also set an Olympic record in winning the 200-meter butterfly before the relay.

“I didn’t know I was doing it until I’d finished the 200 butterfly and our coach told me, ‘You’re in the relay,’” she said through an interpreter. “I didn’t even know how to swim the 200 free, although I have the training qualities and levels for the 200 distances.”

The Americans claimed silver in 7:40.73, while Australia took the bronze in 7:41.29. All three medalists broke the previous world record of 7:41.50 set by the Aussies at the 2019 world championships.

Novak Djokovic is into the medal rounds of the Olympic tennis tournament.

The top-ranked Serb rolled past home favorite Kei Nishikori of Japan 6-2, 6-0 to reach the semifinals and extend his bid for a Golden Slam.

Steffi Graf in 1988 is the only tennis player to achieve the Golden Slam by winning all four Grand Slam tournaments and Olympic gold in the same calendar year.

Djokovic has already won the Australian Open, French Open and Wimbledon this year and needs the Tokyo Games title and the U.S. Open trophy to complete the Golden Slam.

In the women’s tournament, 12th-ranked Belinda Bencic of Switzerland and 2019 French Open finalist Marketa Vondrousova of the Czech Republic will meet in the gold-medal match.

Bencic beat Elena Rybakina of Kazakhstan 7-6 (2), 4-6, 6-3 and Vondrousova — who eliminated Naomi Osaka in the third round — defeated fourth-seeded Elina Svitolina of Ukraine 6-3, 6-1.

Sepp Straka of Austria made four birdies in his last six holes for an 8-under 63 for a one-shot lead over Jazz Janewattananond of Thailand in the first round of men’s golf.

Thomas Pieters of Belgium, who finished one spot out of a bronze medal in Rio de Janeiro five years ago, shot 30 on the back nine for a 65.

Carlos Ortiz of Mexico also had a 65 in ideal scoring conditions on a course so pristine it didn’t have a divot when players first began arriving because it was closed for two months.

Kendricks’ dad posted on social media that his son had no symptoms but was informed while in Tokyo that he tested positive and was out of the competition.

The U.S. Olympic and Paralympic Committee confirmed the news and said Kendricks has been placed in isolation at a hotel.

Kendricks won the bronze medal at the 2016 Olympics and took gold at the past two world championships. He holds the American record at 19 feet, 10½ inches (6.06 meters).

Shortly after Kendricks’ positive test was announced, another pole vaulter, Germán Chiaraviglio of Argentina, said he, too, was out because of a positive test.

Japan’s bid for its first Olympic men’s basketball win in 45 years fell short despite a 34-point effort from Rui Hachimura.

Luka Doncic had another impressive performance with 25 points, seven rebounds and seven assists in 26 minutes, Zoran Dragic scored 24 points and Slovenia remained unbeaten in its Olympic debut by beating Japan 116-81 in the Tokyo Games.

The U.S. pair beat Brackcides Khadambi and Gaudencia Makokha 21-8, 21-6 to improve to 2-0 and almost certainly clinch a spot in the knockout round of 16.

The match was the fastest since the international volleyball federation adopted the rally scoring and best-of-three sets format in 2002.

Americans Phil Dalhausser and Nick Lucena also won, beating Julian Azaad and Nicolas Capogrosso of Argentina 21-19, 18-21, 15-6 to improve to 2-1 in the round robin. That’s good for at least one more match in Tokyo. 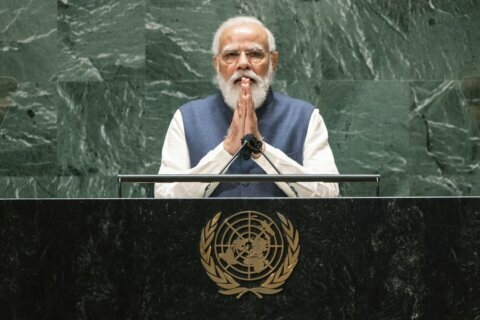 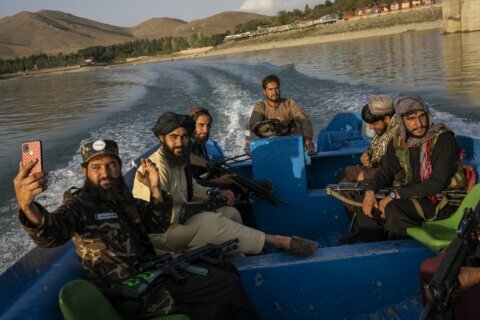 The Latest: Albania says another group of Afghans arrives