EXPLAINER: What to look for at China’s annual Congress

BEIJING (AP) — China’s legislature begins its annual meeting this week with economic growth, climate and a crackdown on political opponents in Hong Kong expected to be on the agenda.

The gathering of the National People’s Congress and its advisory body, the Chinese People’s Political Consultative Conference, brings handpicked delegates from across the country to discuss governing priorities and receive instructions from the ruling Communist Party leadership. Comprising roughly 3,000 members, the NPC is under complete party control and rubberstamps decisions made in advance but also offers the leadership feedback on pressing national concerns.

The party rejects any role for opposition parties or a separation of executive, judicial and legislative powers. Party leader and head of state Xi Jinping has eliminated limits on his term, potentially putting him in control for life. This year marks the centenary of the party’s founding, and leaders will likely repeat a much-ballyhooed though difficult to qualify claim that no parts of the vast country of 1.4 billion people remain mired in extreme poverty.

The state of the world’s second-largest economy takes precedence among the myriad issues presented by Premier Li Keqiang in his address at the NPC’s opening session on Friday. Amid the COVID-19 pandemic, no target for economic growth was issued last year, but China has since shrugged off the impact and is expected to begin shifting its focus back to longer-term efforts to make the country a tech power less reliant on trade. This year will see the start of the 14th five-year plan, a vestige of the planned economy that speaks to the enduring role of state-owned businesses from banks to shipyards. After last year’s multidecade-low 2.3% growth, forecasters say it would be easy to hit 7% as manufacturing and spending rebound.

In the semi-autonomous city of Hong Kong, China is moving to eliminate the possibility of opposition politicians gaining office, saying only patriots loyal to the Communist Party can have a role in government. That could prompt the NPC to reassign votes in the 1,200-member committee that selects the city’s leader to deprive a small number of elected local district counselors from taking part. A sweeping national security law endorsed by the NPC last year has had a chilling effect on free speech and opposition political activity in Hong Kong. China says the city needs stability after months of anti-government protests in 2019, while critics say Beijing has largely abandoned its pledge to allow the former British colony to maintain its own legal, economic and social institutions until 2047.

Expectations are high that the 14th five-year plan will align domestic policies with international pledges on climate change. Xi made a surprise pledge at a United Nations meeting in September that China would go carbon neutral by 2060. He has also pledged that China, currently the world’s largest emitter of climate change-causing emissions, would hit its carbon peak by 2030. China has been a world leader in adding solar and wind power to its energy supply, while continuing to build new coal plants, including overseas under its “Belt and Road Initiative.” To meet its climate goals, China will need to drastically reduce its reliance on coal, with the heavy smog blanketing Beijing this week illustrating the continuing challenge. With the United States rejoining the Paris climate agreement, Washington and others will be seeking evidence that Beijing is making good on its commitments.

US-CHINA RELATIONS AND THE MILITARY

This year’s meeting comes as China and the U.S. are attempting to soften the caustic tone in relations that prevailed during the Trump administration. While President Joe Biden is maintaining pressure over trade and technology, he has shown a willingness to restore dialogue. However, China has not shown any willingness to budge in the face of U.S. support for Beijing-claimed Taiwan and criticism of Chinese policies in Hong Kong, Tibet and Xinjiang. China is also continuing its military buildup and recently passed a law authorizing its coast guard to use force to remove any foreign presence in what it considers Chinese waters and islands. In his speech to the opening session, Li will announce the military budget, whose 6.6% increase last year was the lowest in recent memory, a reflection both of the economic headwinds then facing the country and the massive improvements made during years of double-digit percentage increases that have put China’s defense spending second in the world behind only the United States.

China has largely controlled local transmission of the coronavirus, but is taking no chances while vaccination levels remain relatively low. As was the case last year, the two meetings are being held on a truncated schedule with reporters covering the proceedings from a remote media center. While China last year postponed the meetings until May, it has reverted to holding them in March this year in what the official Xinhua News Agency portrayed as a sign of confidence. “The arrangement reconfirms that China’s political, economic and social life is returning to normal,” Xinhua said in a commentary Wednesday. As usual, security has been tightened in the capital with paramilitary troops patrolling near the Great Hall of the People where the meetings are held and standing guard at subway stations. 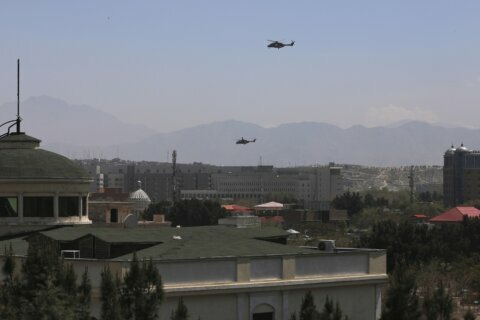