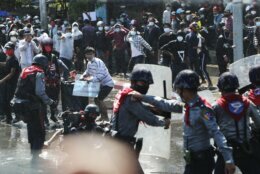 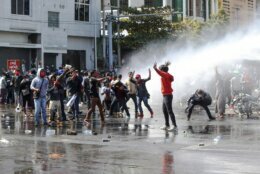 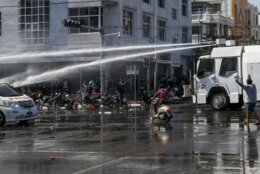 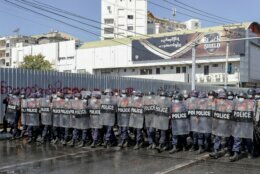 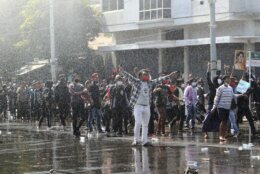 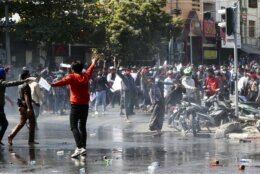 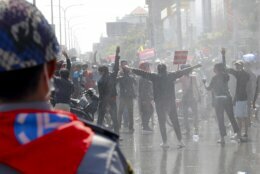 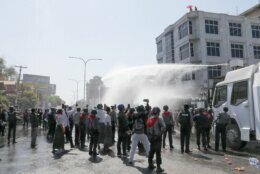 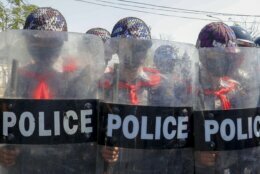 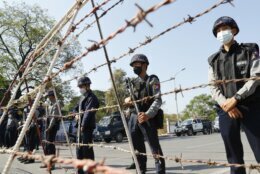 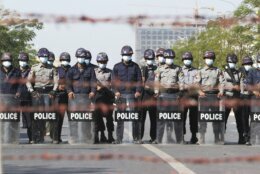 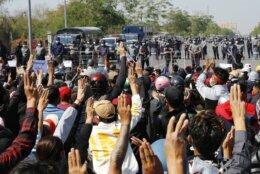 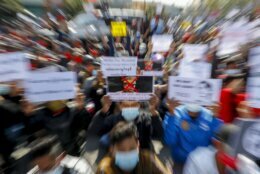 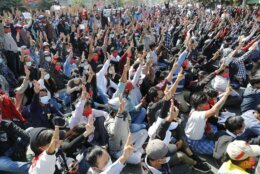 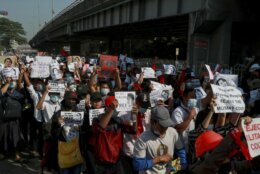 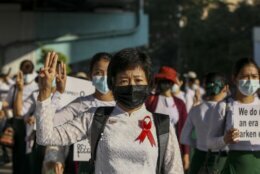 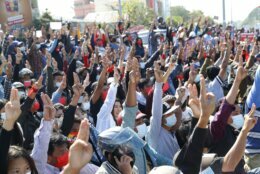 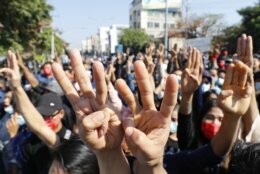 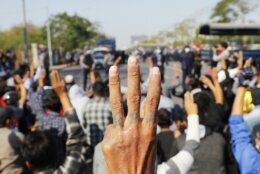 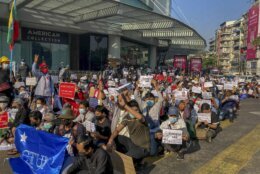 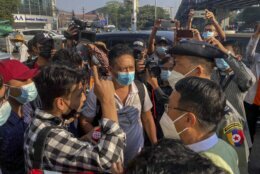 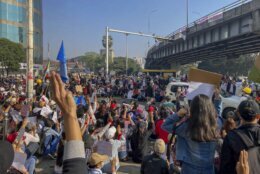 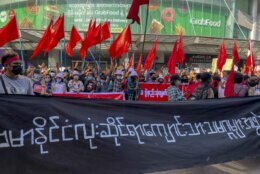 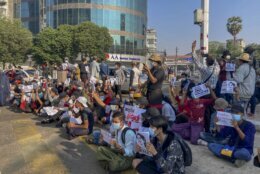 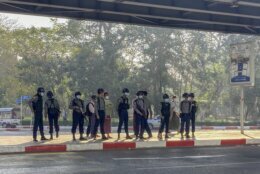 Reports of many injured demonstrators drew strong concern from the U.N.’s office in Myanmar.

“According to reports from Nay Pyi Taw, Mandalay and other cities, numerous demonstrators have been injured, some of them seriously, by security forces in connection with the current protests across the country,” the U.N. said.

“The use of disproportionate force against demonstrators is unacceptable,” said Ola Almgren, the U.N. resident coordinator in Myanmar.

Water cannons were used in Mandalay, Myanmar’s second-biggest city, where witnesses said at least two warning shots were fired in early attempts to break up the crowd. Gunfire could be heard on videos from the city, some of which showed riot police flailing wildly with their batons at people trying to flee. Reports on social media said police arrested more than two dozen people there.

Police also used water cannons in the capital, Natpyitaw, for a second day and fired shots into the air. Police were reported to have also shot rubber bullets at the crowd in Naypyitaw, wounding several people. Photos on social media showed an alleged shooter — an officer with a short-barreled gun — and several injured people. Protesters posted photos online of bullet casings they said they found at the scene.

Unconfirmed social media reports circulated of shootings with live rounds and deaths among the protesters, with the potential of sparking violent retaliation against the authorities — an outcome proponents of the country’s civil disobedience movement have warned against. The AP was unable to immediately confirm the reports.

The weekly magazine 7Day News reported on Twitter that a 19-year-old woman was shot by police in Naypyidaw and was undergoing emergency surgery at the city’s main hospital. It cited Min Thu, the local chairman of the National League for Democracy party of ousted national leader Aung San Suu Kyi.

The protesters are demanding that power be restored to the deposed civilian government and are seeking freedom for Suu Kyi and other governing party members detained since the military took over and blocked the new session of Parliament from convening on Feb. 1.

The growing defiance is striking in a country where past demonstrations have been met with deadly force and are a reminder of previous movements in the Southeast Asian country’s long and bloody struggle for democracy. The military used deadly force to quash a massive 1988 uprising against military dictatorship and a 2007 revolt led by Buddhist monks.

The protests were banned by decrees issued Monday night for some areas of Yangon and Mandalay that made illegal rallies and gatherings of more than five people, along with motorized processions, while also imposing a 8 p.m. to 4 a.m. curfew. It was not clear if restrictions were imposed for other areas. Violators could be punished by up to six months in prison or a fine.

Demonstrations were also held in other cities Tuesday, including Bago — where city elders negotiated with police to avoid a violent confrontation — and Dawei, and in northern Shan state.

In Magwe in central Myanmar, where water cannons were also used, unconfirmed reports on social media said several police officers had crossed over to join the protesters’ ranks. Police in Naypyitaw and Pathein, west of Yangon, were also said to have switched sides. The AP was unable to immediately confirm the reports.

Crowds also gathered in Yangon, the country’s biggest city where thousands of people have been demonstrating since Saturday, despite a heightened security presence. No violence was reported.

Police, not soldiers, appeared to have been deployed to stop the demonstrations, a small indicator of restraint by the military government. The army has a record of brutality in crushing past revolts as well as in fighting ethnic minorities in border areas seeking self-determination. It also has been accused of carrying out genocide in its 2017 counterinsurgency campaign that drove more than 700,000 members of the Muslim Rohingya minority across the border to seek safety in Bangladesh.

State media for the first time on Monday referred to the protests, saying they were endangering the country’s stability.

“Democracy can be destroyed if there is no discipline,” declared a statement from the Ministry of Information read on state television station MRTV. “We will have to take legal actions to prevent acts that are violating state stability, public safety and the rule of law.”

However, the military commander who led the coup and is now Myanmar’s leader made no mention of the unrest in a 20-minute televised speech Monday night, his first to the public since the takeover.

Senior Gen. Min Aung Hlaing instead repeated claims about voting fraud that have been the justification for the military’s takeover, allegations that were refuted by the state election commission. He added that his junta would hold new elections as promised in a year and hand over power to the winners, and explained the junta’s intended policies for COVID-19 control and the economy.

The general’s remarks, which included encouragement for foreign investors, did nothing to assuage concern in the international community.

U.S. State Department spokesman Ned Price said the U.S. condemned violence against the protesters and reiterated the U.S.’s earlier calls for the military to restore power to the elected government. “The international community is attempting every avenue to ensure that democracy and civilian leadership is restored in Burma,” Price said in Washington, using Myanmar’s former name.

The U.N.’s Human Rights Council, based in Geneva, will meet Friday to consider the human rights implications of the crisis. Britain and the European Union spearheaded the request for the special session, which will amount to a high-profile public debate among diplomats over Myanmar and could lead to a resolution airing concerns or recommendations of international action.

“We do not recognize the legitimacy of the military-led government and we call on the military to immediately release all detained political leaders and restore civilian rule,” Mahuta said. New Zealand was also placing a travel ban on the military leaders.

This story has been updated with corrected sourcing for the details on the raid on the ruling party’s office. 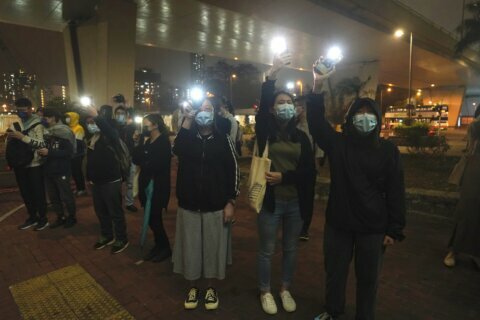 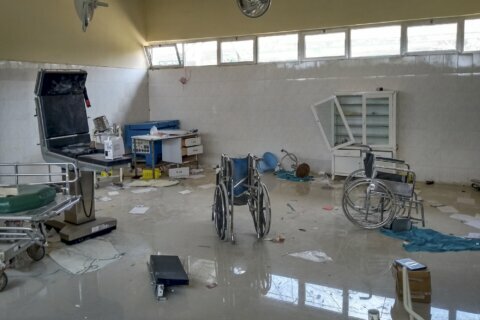 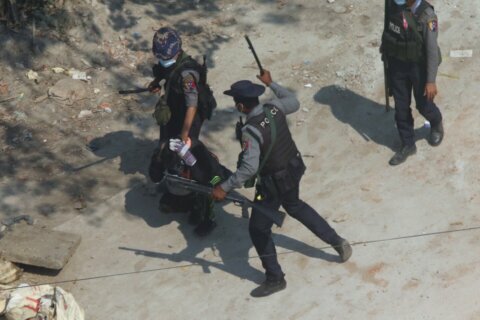