One of the victims was shot in the head and died immediately during the latest rally in the second-largest city of Mandalay, according to Frontier Myanmar, a news and business magazine. Another was shot in the chest and died en route to a hospital.

At least five people were injured by rubber bullets and were carried away in ambulances, according to an Associated Press journalist who witnessed the violence.

Some 500 police and soldiers descended on the area after dock workers joined the national civil disobedience movement, refusing to work until the military junta that seized power in a Feb. 1 coup reinstates the democratically elected government led by Aung San Suu Kyi.

Protesters and residents fled the neighborhood amid the violence and security forces chased after them.

There were reports of sounds that resembled gunfire. A group of journalists also was forced to flee after being hit with tear gas and slingshot projectiles.

Earlier in the week in Mandalay, security forces cracked down on state railway workers in a similar fashion.

Across Myanmar, protests showed no signs of slowing down despite the crackdown — including a sixth consecutive night in which the internet was cut for many hours.

Demonstrators also gathered in Yangon, the biggest city, chanting and holding placards and images of Suu Kyi, who remains under house arrest.

Singapore, which together with Myanmar is part of the 10-member Association of Southeast Asian Nations, condemned the use of lethal force as “inexcusable.”

“We strongly urge the security forces to exercise utmost restraint to avoid further injuries and loss of lives, and take immediate steps to de-escalate the situation and restore calm,” the Ministry of Foreign Affairs said, adding: “If the situation continues to escalate, there will be serious adverse consequences for Myanmar and the region.”

On Sunday, Facebook announced it took down the page run by the Myanmar military information unit “for repeated violations of our community standards prohibiting incitement of violence and coordinating harm.”

Earlier Saturday, protesters paid tribute to a young woman who died a day earlier after being shot by police during a rally in the capital, Naypyitaw.

An impromptu memorial created under an elevated roadway in Yangon attracted around 1,000 protesters. A wreath of bright yellow flowers was hung beneath a photograph of Mya Thwet Thwet Khine, who was shot on Feb. 9, two days before her 20th birthday.

Her death on Friday was the first confirmed fatality among thousands of protesters who have faced off against security forces since top military commander Senior Gen. Min Aung Hlaing took power.

Protesters at the memorial chanted and held up signs that read “End the dictatorship in Myanmar” and “You will be remembered Mya Thwet Thwet Khine.” The supporters also laid roses and rose petals on images of the woman.

U.S. State Department spokesperson Ned Price offered his government’s condolences and reiterated calls on the military to refrain from violence against peaceful protesters.

Security forces have been relatively restrained so far in confronting protesters in Yangon, but appeared to be toughening their stance in areas where there is less media presence.

The junta detained Suu Kyi and prevented Parliament from convening, saying elections in November were tainted by voting irregularities. The election outcome, in which Suu Kyi’s party won by a landslide, was affirmed by an election commission that has since been replaced by the military. The junta says it will hold new elections in a year’s time.

The U.S., British and Canadian governments have imposed sanctions on the new military leaders, and joined other nations in calling for Suu Kyi’s administration to be restored.

The coup was a major setback to Myanmar’s transition to democracy after 50 years of army rule. Suu Kyi came to power after her National League for Democracy party won a 2015 election, but the generals retained substantial power under the constitution, which was adopted under a military regime. 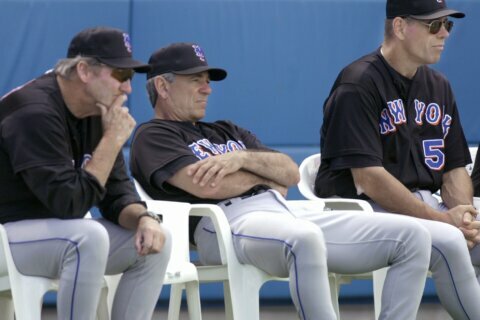