Local performing arts may take a hit in Arlington County, Virginia, after the proposed budget for 2020 outlined major cuts to the local cultural affairs and theater programs.

Officials and residents in Arlington County discussed the proposed budget Tuesday, which totals $1.3 billion, with $810 million dedicated to county operations and a 1.5 cent tax rate increase.

The reductions would include a total of $500,000 in cuts to art funding, which would drastically downsize programs such as CostumeLab, which provides costume rentals to nonprofits and companies in television and film.

“The lab is used typically about five hours a week,” said County Manager Mark Schwartz. “I still think that that doesn’t warrant a full-time employee.”

He suggested staff support be diverted from other county programs to keep CostumeLab running.

Also up for major cutbacks is the scenic shop at Gunston Middle School, where sets are created for community and children’s theater programs.

“I’ve always been proud of our progressive programs and policies — particularly how we leverage scarce resources to create community benefits,” said Tom O’Reilly, a resident who works on scene construction at the scenic shop.

“Rather than proposing to eliminate or minimize these assets, we should be working to increase their usage.”

Schwartz said he’s open to discussing funding for the shop for up to a year.

Alex Bryce, a deaf volunteer with the local arts, spoke through an interpreter, saying budget cuts would limit accessibility.

He shared his experience performing in the county, saying, “23 deaf people paid to see me in ‘The Hunchback of Notre Dame.’ Accessibility puts money back in the county.”

The board will hold another public hearing regarding the budget April 4. 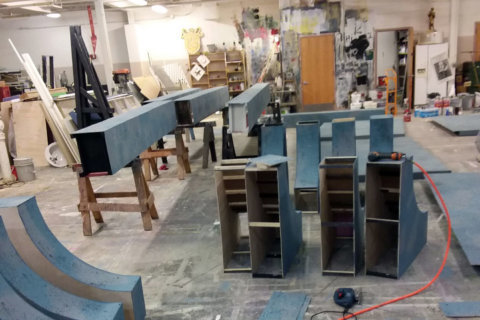