Eight people are in the hospital, two of whom have serious injuries, after a deck collapsed in Glen Burnie, Maryland on Sunday.
Listen now to WTOP News WTOP.com | Alexa | Google Home | WTOP App | 103.5 FM
(1/4) 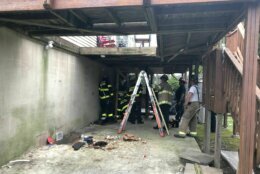 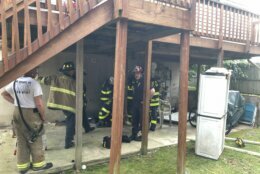 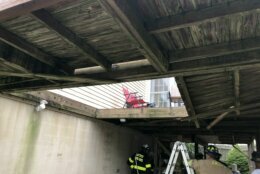 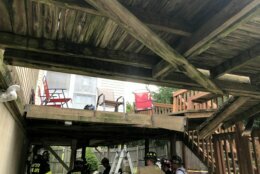 Eight people are in the hospital, two of whom have serious injuries, after a deck collapsed in Glen Burnie, Maryland, on Sunday.

Two people who were on the deck when it collapsed are in the hospital with serious injuries.

Six other people were under the deck when it collapsed. They were taken to the hospital with non-life-threatening injuries.

“It looks like about a 6-by-6 foot section of the deck failed with two people sitting on the deck at the time. Those were the two most seriously injured individuals they were both transported up to Shock Trauma with injuries that were probably serious,” Anne Arundel County Fire and Rescue, Capt. Russell Davies told WTOP.

Officials are currently investigating why the section failed, but said that section of the deck wasn’t under any unusual stress at the time.

The ages of those injured range from 2 to 63 years old.

Davies recommends deck inspections for anyone who is concerned.

“The recommendation would be if you have a deck that’s older and you have concerns about the safety of it that you have somebody come out and do an inspection.”