Coronavirus News: Fairfax Co. votes to increase substitute teacher pay | Is it time to get a COVID-19 booster? Which one? | Local cases of COVID-19 | How many in DC region are vaccinated?
Home » Anne Arundel County, MD News » Sharks in the making:…

Sharks in the making: Local kids run the pool table

For most people, playing a game of pool is simply a leisure activity done with friends to pass the time and have fun. But for a growing number of children, it has turned into more of a lifestyle than a casual hobby.
Listen now to WTOP News WTOP.com | Alexa | Google Home | WTOP App | 103.5 FM

For most people, playing a game of pool is simply a leisure activity done with friends to pass the time and have fun.

But for a growing number of children, it has turned into more of a lifestyle than a casual hobby.

Just last weekend, the Greater D.C. Area APA hosted a juniors tournament at Center Pocket Billiards, in Crofton, Maryland, where kids had a chance to advance to a national competition.

They played nine ball, a game where the player must pocket balls in numerical order from 1 through 9.

Out of nearly 30 children who participated, 10 won the required number of matches to earn spots in the APA Junior Championships. The event is scheduled for late June in St. Louis, where more than 500 kids from across the country will compete in various games for prizes.

“To win a spot in the national tournament really gives them a lot of pride and confidence,” Beatty said. “They absolutely love it.” 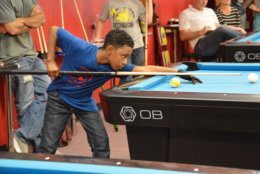 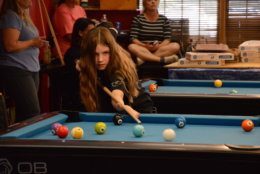 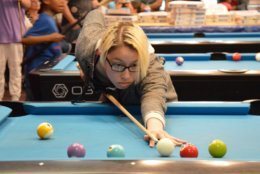 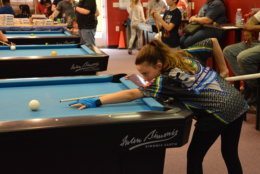 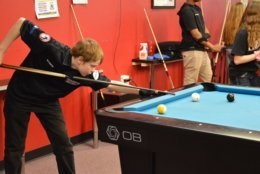 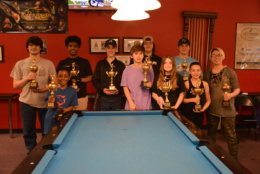 Among the winners was D’Angelo Spain, of Glen Burnie, Maryland, who everyone calls “Jawz.”

He is strikingly young, at just 8 years old; his pool cue looks taller than he is. But he is known to run the table on his opponents, no matter how old they might be.

“I practice a lot — almost the whole day,” Jawz said. “It starts when I first get home from school.”

According to his father and coach, Frank Spain, Jawz first picked up a cue when he was 4.

“He’s just a natural,” Spain said. “I don’t know if he used to shoot pool in his past life or what, but he loves the game and this is all he does.”

Skylar Hess, from Bowie, Maryland, is also advancing to St. Louis. She’s 10, but talks about her love for the game as if she has been playing for decades.

“As soon as I got a pool cue in my hand I didn’t want to stop,” she said. “Every time I got onto the pool table I never stopped until it was my bedtime.”

Just like Jawz, Hess has been coached and guided closely by her family, who hopes to see her playing on the professional level one day.

“Most of our parents are players as well so they have a passion for the sport and they’re eager to teach their kids,” Beatty said.

And the young aspiring pool sharks are eager to learn.

“It’s competitive; I’m having fun and I’m learning new things,” Hess said. “I can be as great as I can be.”