Holidays: Where to see holiday lights | Santa's back with inflation, inclusion on his mind | 4 ways to limit your holiday debt | Inflation 'definitely a guest' at holiday celebrations this year
Home » Anne Arundel County, MD News » Crash is 2nd wrong-way…

The crashes, which each killed two, happened within a half-mile of each other. But there are key differences, including the time of day that they happened.
Listen now to WTOP News WTOP.com | Alexa | Google Home | WTOP App | 103.5 FM

WASHINGTON — Wednesday morning’s deadly crash caused by a wrong-way driver is the second such collision in two months on U.S. 50 near the Chesapeake Bay Bridge.

But there are key differences between the two crashes that each took two lives.

Wednesday’s wrong-way crash happened about a half-mile from the similar crash that occurred May 17.

“A young woman was killed who was going the wrong way on Route 50, but that happened in the early afternoon,” said Greg Shipley, spokesman for the Maryland State Police, regarding the May crash near Maryland Route 2. That crash also killed the driver of the oncoming car.

Wednesday’s crash occurred in the early morning, about 2 a.m.

After the May crash, state traffic engineers inspected the signs and pavement markings in the area of the crash. According to the Maryland State Highway Administration, engineers found that the signage and roadway markings met safety standards meant to prevent wrong-way travel on the busy highway.

Both accidents remain under investigation. 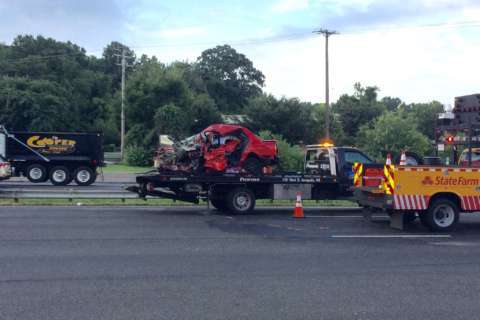