IRONWOOD FOREST NATIONAL MONUMENT, Arizona (AP) — After strapping on knee-high snake guards and bowing his head to invoke God’s protection, Óscar Andrade marched off into a remote desert at dawn on a recent Sunday to look for a Honduran migrant. His family said he had gone missing in late July “between the two hills where the backpacks are.”

The Tucson-based Pentecostal pastor bushwhacked for three hours in heat that rose above 100 degrees (38 Celsius), detouring around a mountain lion, two rattlesnakes and at least one scorpion before taking a short break to call the aunt of another missing man. Andrade believed he found the young man’s skull the previous day.

“Much strength, my dear sister,” Andrade told her, while she repeated incredulously that the “guide” had assured her he left the young man with injured feet but alive. “Sometimes we don’t understand, but there is a reason that God allowed this. And if you need anything, we’re here.”

On the fourth search for that 25-year-old man from the Mexican state of Guerrero, the pastor and his Capellanes del Desierto (Desert Chaplains) rescue and recovery group had found his ID card in a wallet 40 feet (12 meters) away from a skull and other bones, picked clean by animals and the relentless sun in the Tohono O’odham Reservation.

Since March, Andrade has received more than 400 calls from families in Mexico and Central America whose relatives – sick, injured or exhausted – were left behind by smugglers in the borderlands.

Forensic experts estimate 80% of bodies in the desert are never found, identified or recovered. But those that are, added to massive casualties like 53 migrants trapped in an abandoned trailer in San Antonio, Texas, in June and nine migrants swept away in the Rio Grande this month, point to one of the deadliest seasons on record on the always dangerous southwest border.

Fragile economies pummeled by the pandemic in Latin America, ruthless trafficking networks that control virtually all illegal crossings, and shifting U.S. asylum policies that affect migrants of different nationality and family status in drastically different ways all contribute to the toll – as does the Southwest’s extreme heat.

Andrade, his group, and an Associated Press journalist accompanying them among towering saguaro cacti quickly came across evidence of distress on this popular smuggling route – abandoned backpacks, still full of clothes, coins and even deodorant, and half-full water jugs, several days’ walk from the closest towns.

“To be out in the desert is more difficult than to be in a church,” said the 44-year-old pastor and father of three teens, who sometimes join him and his wife, Lupita, on these missions. “Our commitment is firstly with God, and with the families.”

The group didn’t find the missing 45-year-old Honduran, but planned to look again; it usually takes several trips to locate remains in this desert.

It’s one of the deadliest corridors, according to aid groups and the U.S. Border Patrol, for migrants who, fearing being rejected under a pandemic provision called Title 42, try to evade authorities instead of turning themselves in right after crossing or applying for protection legally.

From staging camps guarded by cartel scouts in areas where the border has no fencing or bollard barriers, the migrants – usually men from Mexico and Central America – walk north for more than a week. They have to cross dozens of miles of desert mountains and dry washes before reaching major highways where smugglers’ vehicles will take them to destinations across the United States.

“Once a person told me, ‘How can I believe, look where my brother is, who always did praise and worship,’” Andrade recalled during the recent search. “For God, there are no mistakes. Yes, there are painful things, like the young man from yesterday, who died because of some blisters.”

Faith often motivates volunteer organizations providing aid along the border. The Capellanes, who search for the missing at least once a week in this rough desert, pray with the grieving families as they share updates and somber news.

Being a Christian ministry also reassures families, many of whom are targeted by fake ransom requests after they turn to social media looking for their missing relative. The aunt of the young man from Guerrero, who asked the AP not to use their names because his parents haven’t been told yet of Andrade’s discovery, said she had been targeted repeatedly.

To bring the comfort of God’s word is what motivated Elda Hawkins to be one of the first volunteers to join Andrade’s group, she said at a recent church meeting. A dozen members gathered in a small Tucson church to pray for the young man, receive CPR credentials, and discuss a fundraising food drive.

“We can be a light of hope, for those about to die or for their families,” Hawkins said.

Andrade’s group doesn’t charge families for the searches, though some contribute to the cost of gas for his truck ferrying the group down rough dirt roads to where they set out on foot. It also works closely with law enforcement, notifying the Border Patrol of every search and then local authorities if it finds human remains, as it has nearly 50 times.

Even then, the migrant’s body still has a long journey home. It takes time for authorities to retrieve the remains, which are then subject to forensic analysis to determine the cause of death. Often, that’s never established; in other cases, the cause is listed as “environmental,” especially heat stroke and dehydration, said Dr. Greg Hess, chief medical examiner for Pima County.

That puts 2022 on track to match the last two years, when cases were almost double other years in the last decade recorded by the office. Along the entire US-Mexican border, since last fall Customs and Border Protection agents stopped migrants for crossing the border illegally more than 1.8 million times, historically an extraordinarily high number. The agency recorded 557 Southwest border deaths the previous year, the highest since it began tracking them in 1998.

Given how quickly a body decomposes in the desert, unless it’s found within a day of dying, identification might require expensive and time-consuming DNA analysis, Hess said.

“The desert does a good job covering up crimes,” said Mirza Monterroso, a forensic scientist and missing migrant program director for the Colibrí Center, a Tucson-based group that works with the examiner’s office.

Her database has 4,000 missing migrants – 1,300 in Pima County alone – from reports from 14 countries and 43 U.S. states. She helps coordinate DNA analysis, costing more than $1,100 per body with a bulk discount.

Consulates help cover some of those expenses, as well as the nearly $4,000 it takes to repatriate the remains, which is what most families want, said Azhar Dabdoub, who manages a Tucson funeral home. It was arranging for flights of five migrants’ bodies to Guatemala and one to El Salvador last week.

“This is what forced migration looks like at the end,” he said, standing next to dozens of just-delivered caskets. They were customized with a small viewing window so families can see something of their relative, even if just a small belonging Dabdoub tapes to the glass.

As soon as the remains Andrade just found are recovered, Monterroso will start working on confirming if they are indeed the young Mexican man’s. That might take up to a year unless there’s a lucky break, like dental records.

The young man’s aunt, who’s lived in the United States since she was 14, told the AP from her home in New York that she still hopes for a miracle. But if the remains are his, “we fought to the end to recover what little is left.”

“My nephew’s dream died at the border, but a person shouldn’t end up like this,” she said, her voice breaking. “They left him in the desert because he had injured his feet.”

A 38-year-old father of two from Mexico City nearly died the same way last week after he developed debilitating foot blisters near the Baboquivari Peak, just 14 miles (23 kilometers) north of the border in Pima County.

Without food for two days and now out of water, he called 911 and was helped down the mountain by Daniel Bolin, an agent with the Border Patrol’s search, trauma and rescue team who said this was his fifth rescue this year in the same spot. Bolin brought him Gatorade and water before walking him down the precipitous mountain ridge for an hour to an area reachable by all-terrain vehicle.

The agency performed 3,000 rescues in the Tucson sector alone over the last 12 months, and another 911 call came from the same mountain that afternoon.

About then, sitting in the back of a Border Patrol truck and facing almost certain expulsion to Mexico, the rescued man, who gave his name as Leonardo, said he lost his business during the pandemic and came to the United States to find the work he’s been unable to get for two years.

Asked about his future, he murmured “I don’t know” and burst into sobs, tears rolling down his sunburned face. 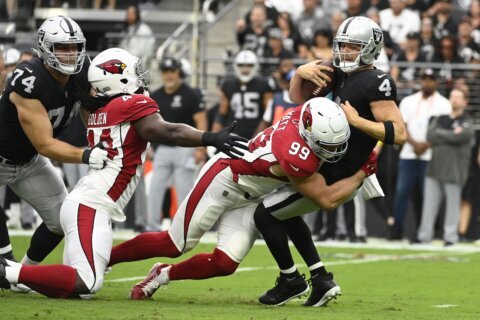