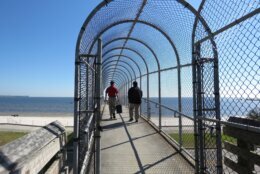 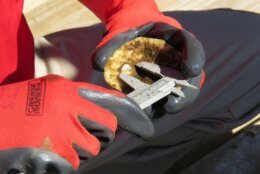 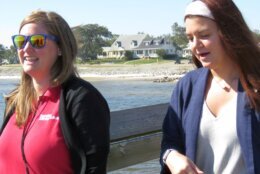 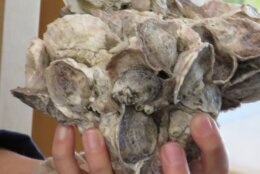 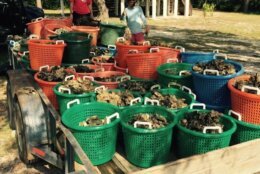 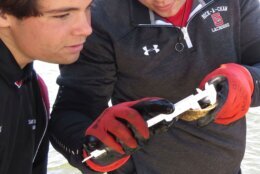 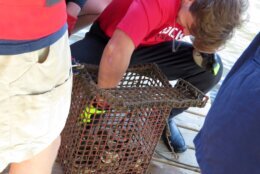 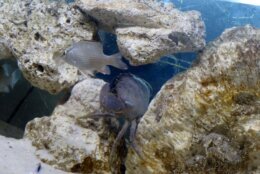 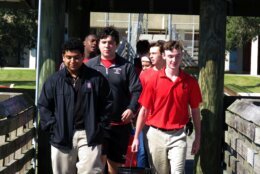 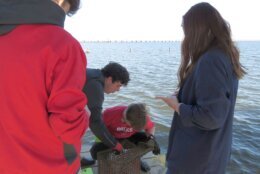 Students on a platform below the school’s long pier gently shake their oyster garden’s wire cages as they pull them from the water, loosening mud and algae that might keep water and nutrients from baby oysters clinging to those shells.

These students in Bay St. Louis are part of a volunteer force along U.S. coasts that’s raising oysters from translucent spat the width of a soda straw to hard-shelled bivalves that can help restore depleted reefs.

Oyster reefs are a keystone of coastal ecosystems. Each oyster filters 25 to 50 gallons (95 to 190 liters) of water a day. Spat glue themselves to larger oysters and grow. The reefs provide habitat for shrimp, crabs and fish and protect shorelines.

In Maryland, Virginia, Mississippi and Alabama alone, there are more than 1,000 oyster gardens, most in wire cages hanging from private docks or open-topped floats tied to them.

Dennis Hatfield of Gulf Shores, Alabama, said he is struck each summer by the number of crabs, fish, shrimp, sponges and other animals he clears from his cages on Little Lagoon.

“I feel very positive we are creating habitat in the lagoon,” he said, adding that many of the 50,000 to 55,000 adult oysters grown there each year go to reefs in Mobile Bay.

In the 1950s, an average of 37,400 tons of oysters were taken annually from brackish waters nationwide. But overharvesting, pollution, parasites, smothering sediment and other problems saw U.S. oyster harvests fall 68% to about 11,900 tons a year in the 1990s, federal figures show.

Commercial farmers around the country grow oysters near the surface because they mature much faster where the water holds more of the plankton they eat and predators can be more easily removed.

Oyster gardening uses the same techniques on a smaller scale. But the oysters aren’t being grown for the half-shell or deep fryer.

It’s as much education as restoration, said Bob Stokes, director of the Galveston Bay Foundation in Texas. Volunteers become “engaged about caring about the bay they live on,” he said.

Big enough to spawn next spring, they’re now on reefs being restored for fishing or reserved to hold brood stock for future generations, with no harvest allowed.

In the Mississippi Sound, heavy rains through spring and summer were hard on baby oysters. Most shells in the cages set out in late June at St. Stanislaus held only silt in mid-November, and surviving juveniles were generally less than an inch long.

“When you find one with an oyster, put it aside so you don’t count them twice,” cautioned Rayne Palmer, an Auburn University graduate student who runs the Mississippi-Alabama Sea Grant’s gardening program in Mississippi.

Oyster shells are the hard surface spat prefer, and entire artificial reefs are made from recycled shells. The Galveston Bay program puts mesh bags holding recycled shells into the water to attract spat and give them a head start.

Oyster gardening started in the late 1990s around the Chesapeake Bay, where harvests had plummeted 90% in two decades.

The Mississippi-Alabama Sea Grant’s oyster gardening program, modeled on the Chesapeake’s, started in Alabama in 2001 as master’s thesis research.

“It makes me really happy to see that it took off and people are still doing it” in Alabama, said Kimberly Henderson Hedrick, who won a Gulf Guardian Award in 2004 as head of Alabama’s Shellfish Restoration Project and now teaches in the Indiana farm town where she grew up.

The Chesapeake Bay oysters were beset by two highly lethal parasitic diseases, in addition to other problems. Declines in the second half of the 1900s followed an even more drastic crash in the 1920s from rampant overharvesting, said Chris Moore, senior ecosystem scientist for the Chesapeake Bay Foundation.

Gardeners in the foundation and its member groups have added at least 15 million oysters in Maryland and 1 million in Virginia, Moore said.

An umbrella group called the Chesapeake Oyster Alliance has set a goal of 10 billion added oysters by 2025.

“Wish us luck, that’s gonna be tough,” Spain wrote in an email.

Dozens of schools and community groups around New York Harbor have similar projects as part of the Billion Oyster Project, spokeswoman Helene Hetrick said in an email. The project does not call them “oyster gardens” because the harbor’s oysters are unsafe to eat and the goal is not food but restoration, she said.

Oyster gardens get pulled from the water every week to 10 days to clear out critters, keep oysters from growing through the cage mesh, and dry out and clean off algae and seaweed growing on the wire.

It can take oysters three to four years to reach adulthood in the Chesapeake, and a year to 18 months in raised cages.

In Mobile Bay and in Mississippi, it may take only four to five months to have oysters ready to transplant, said P.J. Waters, an Auburn University extension associate professor who oversees Alabama’s oyster gardening at Mississippi-Alabama Sea Grant.

Colin Wood, one of two student interns who maintain the St. Stanislaus garden, collect data and supervise other students — not for pay but for a credit on their transcripts — said he was excited by the hands-on aspect.

“I didn’t realize oysters had a big impact on the environment,” he said. 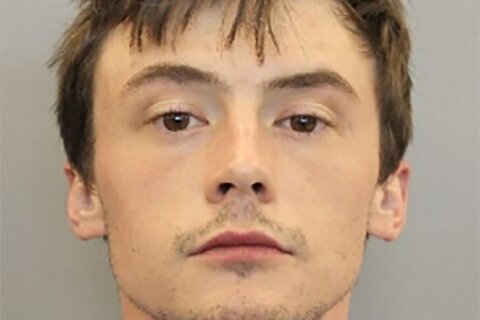 Musher out of Iditarod after crash killed 1 dog, injured 3