Juuse Saros stopped 40 shots and the Predators beat the Panthers for the first time in four games.

“It’s nice to be back. Felt good out there,” said Saros, who played for the first time since missing seven games with an upper body injury. “It was a great, gutsy game from us. Really good effort from everybody. Good character win.”

Jonathan Huberdeau scored for the Panthers. Sergei Bobrovsky made 25 saves and lost for the first time in seven starts. The Panthers had their four-game win streak snapped.

The teams complete their two-game series on Saturday.

Jarnkok’s second goal gave the Predators a 2-1 lead at 1:17 of the third. Bobrovsky misplayed the puck behind the net and couldn’t get back before Mikael Granlund passed from behind to Jarnkok, who fired the puck in from the slot.

“We got two wins in a row now and it feels good to be winning hockey games,” said Jarnkok, who has six points in two games. “That’s what I’m thinking right now.”

Huberdeau gave the Panthers a 1-0 lead when Patric Hornqvist launched a saucer pass over a fallen Nashville defender to Huberdeau in front. He put the puck behind Saros with 1:22 left in the first.

“I think we gave up a little too many chances tonight,” Huberdeau said. “We were lucky that it was a 2-1 game. (Bobrovsky) made some really good saves and kept us in the game. I think Saros was pretty good on the other side, too.”

Jarnkrok tied the game at 1 when he swatted the puck in mid-air from the slot and into the net with 12:35 left in the second.

The Panthers killed off a 5-on-3 for 1:48 in the first period, aided by three blocked shots by Noel Acciari.

“There were some good things but not enough,” Panthers coach Joel Quenneville said. “They worked hard and played better than we saw earlier this year. The games are going to get harder. Everybody’s going to value points going forward and it’s going to be a test for us.” 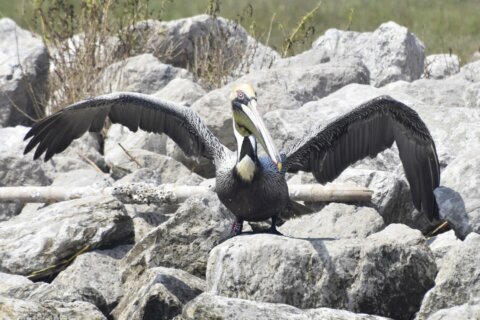