Coronavirus News: Fairfax Co. votes to increase substitute teacher pay | Is it time to get a COVID-19 booster? Which one? | Local cases of COVID-19 | How many in DC region are vaccinated?
Home » Animals & Pets » WATCH: LEGO wheelchair helps…

A wild Eastern box turtle at The Maryland Zoo is rolling along just fine and healing from an injury to its shell thanks to the help of custom-made wheelchair made from LEGOs. See photos and video.
Listen now to WTOP News WTOP.com | Alexa | Google Home | WTOP App | 103.5 FM

WASHINGTON — A wild Eastern box turtle at The Maryland Zoo is rolling along just fine and healing from an injury to its shell thanks to the help of custom-made wheelchair made from LEGOs.

The turtle was found in Druid Hill Park with multiple fractures to the bottom part of his shell in July, said Dr. Ellen Bronson, senior director of animal health, conservation and research at the zoo. Veterinarians performed a surgery on the turtle and added metal bone plates, sewing clasps and surgical wire to help keep the shell fragments together, according to the zoo.

“It was important to keep the bottom of the shell off the ground so it could heal properly,” said Garrett Fraess, a veterinary extern at the zoo. “They don’t make turtle-sized wheelchairs. So, we drew some sketches of a customized wheelchair and I sent them to a friend who is a LEGO enthusiast.”

A few weeks after surgery, the grapefruit-sized, approximately 18-year-old turtle had his own LEGO wheelchair, which gets him off the ground and allows his legs to move. 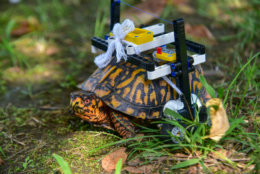 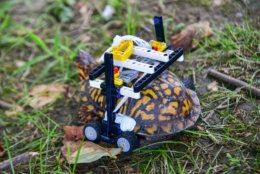 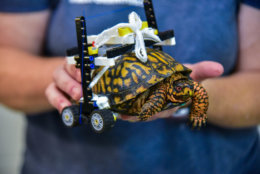 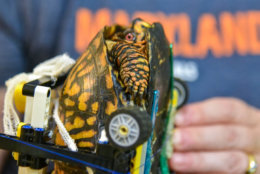 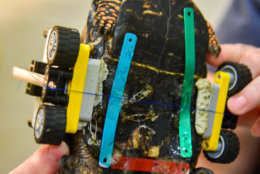 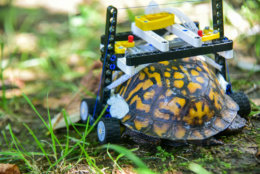 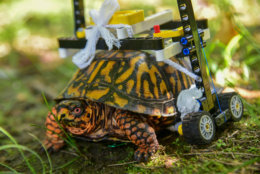 “I thought he might still be a little bit limited on movement, but he can turn on a dime, he can scoop like a normal turtle,” said Fraess. “He’s already come so far … Now we just have to wait and eventually we’ll work toward taking off the pieces little bit by little bit.”

Bronson said the turtle will likely use the wheelchair into the spring “until all the fragments have fused together and the shell has completely healed.”

“We are very happy that he is recovering well from his injuries and we plan to return him to the wild once he is fully healed,” Bronson said.