WASHINGTON — After a battle that dragged on for years, on Friday, the Virginia Supreme Court ruled that Alexandria’s controversial waterfront project can be developed. It was the final roadblock.

Also on Friday, the developer addressed one of the concerns brought up by residents.  EYA, the Alexandria waterfront developer, is offering to use barges instead of dump trucks during construction.

“Heavy dump trucks going up and down Gibbon Street and down Union Street, which I think the barge is a perfect solution for the city,” says business owner and Old Town resident Elizabeth Myllenbeck. Both she and her husband, Rick Myllenbeck, say they like the barge idea.

Old Town resident Steve Louis is also on onboard with the barge idea saying, “It doesn’t really affect traffic as much.”

Even Friends of the Alexandria Waterfront, a group that’s been against the waterfront project, says it’s very pleased that the developer of the South Robinson Terminal is agreeing to use barges instead of trucks to move soil to and from that property.

Bert Ely with Friends of the Alexandria Waterfront, in an email, says,” We hope that other developers will do the same, specifically at the North Robinson Terminal as well as the Carr organization, should it build its planned hotel near the waterfront.”

The barge agreement will be included in a report to the city’s planning commission during a public hearing 7 p.m. on Thursday, April 9 at Alexandria’s City Hall, 301 King St. 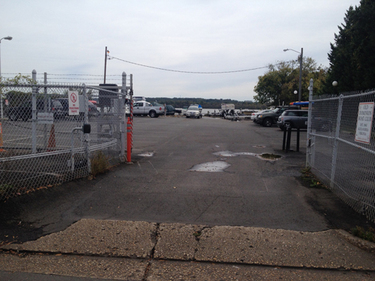