JOHANNESBURG (AP) — The French energy firm Total announced Monday that it has halted all operations on its $20 billion investment in a liquified natural gas project in northern Mozambique as a result of the extremist rebel insurgency there.

Total’s declaration of force majeure casts doubt on the future of the gas project, which had been expected to bring large and sustained economic growth to Mozambique’s struggling economy.

The announcement comes just over a month after the rebels attacked Palma, just a few kilometers (miles) from Total’s gas project. The rebels’ assault on Palma lasted for five days during which more than 80 people were killed, banks were robbed and buildings destroyed. Some 50,000 people fled Palma, adding to the humanitarian crisis in northern Mozambique.

The insurgency had cause Total to suspend work on the gas project in January. Ironically Total had announced on March 24 that the security situation had improved and it could resume work on the project. But just hours later the rebels attacked Palma, forcing Total to abruptly close the project again.

On April 2, Total withdrew all of its staff from the project site, a move it formally confirmed with the annoucement of force majeure.

The declaration aims to “mitigate the negative effects” from “contracts and costs in goods and services which cannot be delivered or used during this period in which activities are suspended,” Mozambique’s oil sector regulator, the National Petroleum Institute, said in a press conference in Maputo, the capital, on Monday morning.

“With the temporary interruption of its operations, Total will not be able, during this time, to fulfill its contractual obligations and could yet suspend or rescind more contracts with other suppliers or goods and/or services, depending on how long the interruption lasts,” the body’s chairman Carlos Zacarias told journalists.

“Declaring force majeure is not done lightly. It’s tantamount to a nuclear option,” Daniel Driscoll, a lawyer specializing in African natural resource developments who has worked on another gas project in Mozambique told the Zitamar news agency. “I interpret Total’s declaration to mean that they don’t see the security situation in Cabo Delgado improving anytime soon.”

Total provided no expectation of when it would get back to work — saying only that it “wishes that the actions carried out by the government of Mozambique and its regional and international partners will enable the restoration of security and stability in Cabo Delgado province in a sustained manner.”

A task force from the 15-nation Southern African Development Community visited Mozambique last week to assess ways in which member countries, including neighbors South Africa, Zimbabwe, and Tanzania, might be able to help Mozambique combat the insurgency, which has killed at least 2,800 people since it started in Oct. 2017, according to the Armed Conflict Location and Event Data project, ACLED.

The U.S. has sent 12 special forces officers to help train Mozambique’s military, and the European Union is considering sending a military training mission to build on a training program provided by Portugal, according to a recent report by Cabo Ligado, a project led by ACLED to research the conflict. A private military contractor, Dyck Advisory Group, provided helicopter air support to Mozambique’s police but its contract expired at the start of April and was not renewed.

The Total announcement comes as thousands of people are stuck at Quitunda, a village built by Total just outside the fence of the project for 300 workers and their families. When the rebels attacked Palma in late March hundreds of contract workers and residents flocked to Quitunda in the hope of being protected from the violence and being evacuated to safety. Now an estimated 20,000 people are clustered by the fence of the Total project battling hunger, rains, and disease and hoping to get to safety. Although the government has urged people to return to their homes in Palma, people are too afraid to go back because of recent killings there, reportedly by both the rebels and government forces. 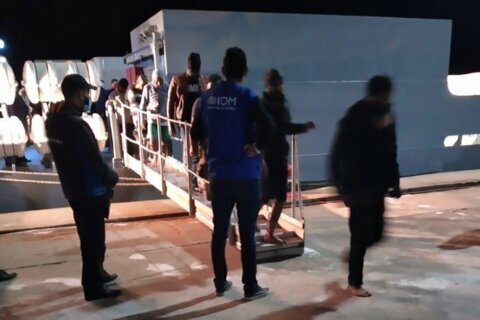