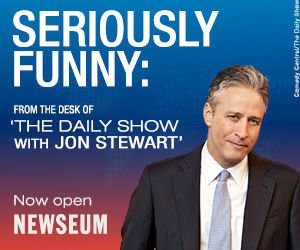 With his furiously funny brand of satire, Jon Stewart and his “Daily Show” correspondents skewered politicians and the press, challenging the integrity of government, the news media and democracy along the way. As the 2020 presidential campaign season heats up, this exhibit will explore the impact Comedy Central’s “The Daily Show with Jon Stewart” had on American politics and the press through four presidential campaigns, two wars and the terrorist attacks of Sept. 11, 2001. Stewart’s humorous take on the daily news — amplified by the arrival of social media and YouTube — made him the go-to source for information for a new generation of news consumers. Many viewers considered Stewart a more trusted source for news than actual broadcast journalists.

More than 50 artifacts will be on display, from “The Daily Show” and the satirical news shows it inspired, as well as print publications that reported on the show’s influence. The exhibit also features an original Newseum-produced film that goes behind the scenes at “The Daily Show with Trevor Noah.” The centerpiece of the exhibit will be Stewart’s desk from “The Daily Show,” donated to the Newseum after Stewart’s final appearance on the late-night series after 16 years hosting the popular program.

“Seriously Funny” will also explore humor as a protected form of free speech under the First Amendment and Stewart’s lasting influence on political satire through the comedians he mentored, including Stephen Colbert, John Oliver, Samantha Bee, Hasan Minhaj and Trevor Noah, current host of “The Daily Show.”

Win tickets to the Newseum by listening to WTOP 103.5 FM.

Contributing support for Seriously Funny: From the Desk of ‘The Daily Show with Jon Stewart’ was provided by Comedy Central.