KABUL, Afghanistan (AP) — Last June, a team of female doctors and nurses drove six hours across mountains, dry riverbeds and on unpaved roads to reach victims of a massive earthquake that had just hit eastern Afghanistan, killing more than 1,000 people.

When they got there, a day after the earthquake hit, they found the men had been treated, but the women had not. In Afghanistan’s deeply conservative society, the women had stayed inside their tents, unable to come out to get medical help and other assistance because there were no women aid workers.

“The women still had blood on them,” said Samira Sayed-Rahman, from the aid agency International Rescue Committee. It was only after she met local elders to tell them about the arrival of a female medical team that women came out to get treatment. “That’s not just the situation in emergencies; in many parts of the country, women don’t go out to get aid,” she said.

It’s an example, Sayed-Rahman said, of how vital women workers are to humanitarian operations in Afghanistan — and shows the impact that will be felt after the Taliban last month barred Afghan women from working in non-governmental organizations.

The ban, announced Dec. 24, forced a widespread shutdown of many aid operations by organizations that said they cannot and would not work without their female staff. Aid agencies warn that hundreds of thousands are already hurt by the halt in services and that, if the ban continues, the dire and even deadly consequences will spiral wider for a population battered by decades of war, deteriorating living conditions and economic hardship.

Aid agencies and NGOs have been keeping Afghanistan alive since the Taliban seized power in August 2021. The takeover triggered a halt in international financing, a freeze in currency reserves and a cut-off from global banking, collapsing the already fragile economy. NGOs have stepped into the breach, and providing everything from food provisions to basic services like health care and education.

After the ban, 11 major international aid groups along with some smaller ones suspended their operations completely, saying they cannot operate without their women workers. Many others have reduced their work dramatically. A post-ban survey of 151 local and international NGOs found that only about 14% were still operating at full capacity, according to U.N. Women.

U.N. agencies have continued working – most vitally to largely maintain the food lifeline that is keeping millions of Afghans out of starvation. Despite the ban, the World Food Programme provided food staples or cash transfers for food to 13 million people in December and the first week of January — more than a quarter of Afghanistan’s population of some 40 million.

The extent of the ban’s implementation and enforcement is unclear. In some places, some women have been able to continue working in the field.

The International Rescue Committee, which has suspended all its operations, estimates that around 165,000 people missed out on its health services between Dec. 24 and Jan. 9. It warned of an increase of death and disease because of the ban and an increased burden on Afghanistan’s health system, which it said is “already fragile, near-to-collapse, and NGO-dependent.”

IRC supports more than 100 health facilities in 11 provinces, including 30 mobile health teams, in some cases delivering lifesaving help to remote areas that had no humanitarian aid of any kind.

“It’s the only healthcare that some women have access to,” said Sayed-Rahman of the mobile teams. “Parts of Afghanistan still don’t have hospitals, clinics or other medical facilities. With each day that passes, the suspension has a huge impact on the amount of aid being delivered.”

While the bulk of food aid has continued to flow, important nutritional programs have stopped.

Save The Children is among the agencies that completely suspended its activities on Dec. 25. As a result, tens of thousands have not received nutritional support.

Last month before the ban came into effect, Save the Children helped nearly 30,000 children and nearly 32,000 adults with nutrition, including providing calorie- and vitamin-packed peanut paste to babies and children and porridge for women. The halt has also interrupted cash transfers to 5,077 families, who received one round of money in December but none of the further planned rounds – funds they rely on for food and other supplies.

Child malnutrition numbers are high and rising in Afghanistan, with a 50% increase over the past year. Around a million children under the age of 5 will likely face the most severe form of malnutrition this year, according to U.N. figures. Almost half of Afghanistan’s 41 million people are projected to be acutely food insecure between November 2022 and March 2023, including more than 6 million people on the brink of famine, according to the World Food Programme.

“Children’s lives (in Afghanistan) are hanging in the balance,” said Keyan Salarkia from Save the Children.

“If you don’t get the right type of food in the first 100 days, then that has a knock-on effect for the rest of your life,” he said. In cases of severe acute malnutrition, after 10 days “you start slipping into loss of life,” he said.

Salarkia said the ban will affect almost everyone in Afghanistan one way or another. Save the Children was also providing classes for children, immunization and child protection. Its cash grants helped families feel they didn’t have to sell their children into marriage or labor. Without that support, more children will be married off or forced to work.

“The ripple effects of this will be huge, which is why we hope to see it reversed as soon as possible.”

Salarkia recalled the impact when Save the Children briefly stopped work for security reasons after the Taliban takeover in August 2021. The pause only lasted a couple of weeks, but workers on mobile health teams said some children they had seen regularly before never returned.

“That’s how quickly the situation changes,” he said. 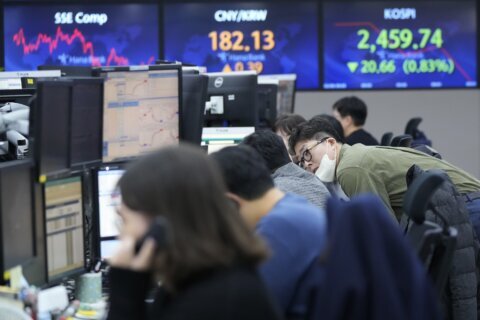