The arrest of Fawad Chaudhry, an outspoken critic of the government, is a major setback for the party, Pakistan Tehreek-e-Insaf, in which he serves as vice president. The party quickly condemned the arrest and demanded his release.

Khan also denounced the arrest, claiming on Twitter that it left no doubt that Pakistan has become a place “devoid of rule of law.” He urged followers to “stand up for our fundamental rights” to prevent the country from drifting toward “a point of no return.”

The arrest took place during a predawn raid at Chaudhry’s house in Lahore, the capital of eastern Punjab province, his family said. Shireen Mazari, a spokesperson for Khan’s party, said Chaudhry was taken in handcuffs straight to court by police in Lahore.

Hours later Chaudhry, amid tight security, was brought to Islamabad, where a judge allowed police to keep him in custody for two days to determine why he threatened the chief of the elections oversight body and other officials.

Chaudhry’s wife, Hiba Fawad, told reporters that security forces were rough with her husband, pushed him into a vehicle and whisked him away.

“There is a procedure to follow if you want to arrest someone,” she said. “It cannot happen that ten or twelve people enter a house, detain someone, throw him into a vehicle and take him away without telling the family where are they taking him.”

Footage released later by the party showed Chaudhry’s supporters gathered at the court and throwing rose petals at him as police led him toward a courtroom.

Angered over his arrest, hundreds of Chaudhry’s supporters blocked a key highway in Jehlum, his home city in Punjab province, to demand his release.

In a statement, Islamabad police said Chaudhry was arrested on a complaint from the Election Commission of Pakistan on charges of threatening the head of the elections overseeing body, Sikandar Sultan Raja, and other officials. The threats were meant to prevent them from performing their duties and incite people to violence against them, police said.

Information Minister Marriyum Aurangzeb later Wednesday claimed Chaudhry’s arrest was not political and that he is not a case of “political victimization.””

Chaudhry was arrested after publicly threatening election officials — and even members of their families, she said. “This arrest was made on a complaint from the election commission,” Aurangzeb said.

“If we had any intention to make political arrests, we might have arrested Imran Khan, but we had no such intention,” she said.

On Tuesday, Chaudhry criticized the elections overseeing body for appointing a veteran journalist, Mohsin Naqvi, as caretaker chief minister in Punjab. Khan’s party and its allies were in power in Punjab and held majority seats in the provincial assembly but dissolved the house earlier this month, a move that apparently sought to pressure the government in Islamabad.

The dissolution of the provincial assembly set in motion snap elections, which under the constitution are to be held within 90 days.

Chaudhry also told reporters Tuesday that Prime Minister Shahbaz Sharif’s government could arrest Khan at any time. Khan, who remains popular with a huge grassroots following, was ousted in a no-confidence vote in Parliament last April and has been leading the opposition since.

A former cricket star turned Islamist politician, Khan was wounded in a gun attack while leading a rally toward the capital, Islamabad, last November. One of Khan’s supporters was killed and several others were wounded in the shooting.

In October, the elections commission disqualified Khan from holding public office for five years after finding he had unlawfully sold state gifts and concealed assets as premier. Khan denies the charge and has filed a motion with a court to challenge the commission.

Khan has also claimed that he was toppled in a plot by Sharif and Washington, claims they both deny.

Along with the provincial assembly in Punjab, Khan’s allies earlier this month also dissolved the legislature in northwestern Khyber Pakhtunkhwa province, where Pakistan Tehreek-e-Insaf also had majority seats. The party has demanded early federal elections, which Sharif’s government has rejected, saying the vote will be held as scheduled later this year. 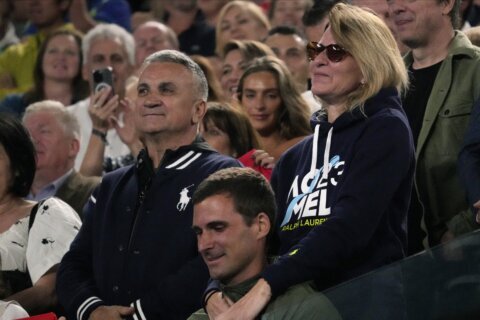 Djokovic’s dad to stay away from Australian Open semifinal