BERLIN (AP) — Most of the defendants standing trial over a spectacular 2019 break-in at Dresden’s Green Vault museum, in which 18th-century treasures were stolen, have reached a deal that would get them reduced punishment in exchange for confessions and the return of much of the haul, a judge said Tuesday.

Tuesday’s development came after German authorities announced in mid-December that they had recovered a significant part of the stolen treasures in Berlin. They said at the time that the find was preceded by exploratory talks on a possible agreement that would include the return of stolen items.

In the first court session since then, presiding Judge Andreas Ziegel said that four of the six defendants have agreed to the proposed deal with prosecutors and the Dresden state court and plan to make statements when the trial resumes on Jan. 17, German news agency dpa reported. A fifth defendant wants to make a decision before then. The sixth denies involvement, pointing to an alibi.

Ziegel said the initiative to hand back jewelry that is still to hand came from the oldest of the defendants, a 29-year-old. However, parts of the haul were missing and several pieces incomplete or damaged.

The court will want to see “credible” confessions in which the defendants give concrete details of the planning and execution of the heist and their own contributions, the judge said. The deal could lead to reduced sentences and possibly their conditional release.

The six men went on trial in January, accused of gang robbery and arson over the Nov. 25, 2019 heist. The German nationals were accused of stealing jewelry with a total insured value of at least 113.8 million euros ($122 million).

Officials said at the time that the items taken included a large diamond brooch and a diamond epaulette. The treasury of Augustus the Strong of Saxony was established in 1723 and contains around 4,000 objects of gold, precious stones and other materials on display in Dresden’s Royal Palace.

Prosecutors have said that the suspects lit a fire just before the break-in to cut the power supply for street lights outside the museum, and also set fire to a car in a nearby garage before fleeing to Berlin. 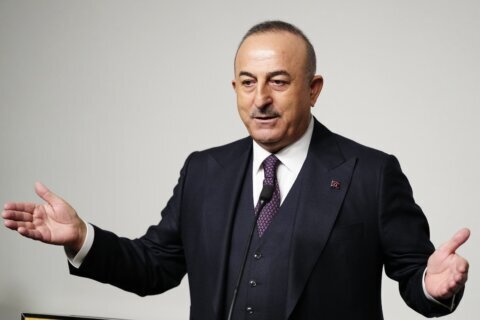