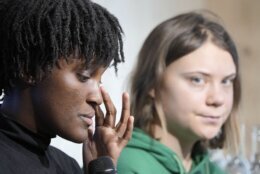 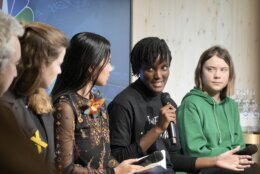 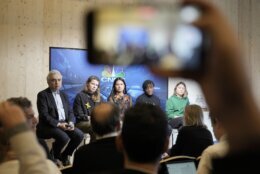 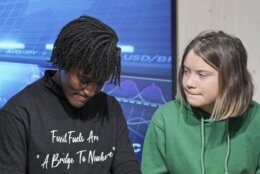 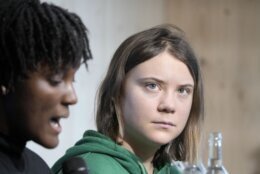 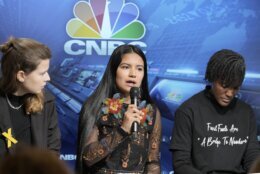 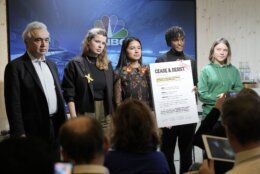 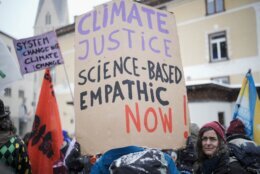 DAVOS, Switzerland (AP) — Swedish climate campaigner Greta Thunberg on Thursday slammed corporate bigwigs meeting in Davos, Switzerland, for “fueling the destruction of the planet” by investing in fossil fuels and prioritizing short-term profits over people affected by the climate crisis.

Nakate, who at one point choked up, said “leaders are playing games” with people’s futures.

Gualinga said the world is “taking a really dangerous path.”

The activists brought a “cease and desist” letter calling on the heads of fossil fuel companies to stop all new oil and natural gas projects, signed by nearly 900,000 people. Scientists say no new fossil fuel projects can be built if the world is to limit global warming to 1.5 degrees Celsius (2.7 degrees Fahrenheit) in line with climate goals set in Paris in 2015.

Nakate added that current levels of warming, which have reached up to 1.2 degrees Celsius (2.2 F), means it is “already a living hell for many communities across the African continent, across the Global South” who are facing extreme drought, heat and flooding.

Activists have been increasingly critical of the lack of action taken by governments and large corporations in recent years.

Birol, meanwhile, said he had “legitimate optimism” that the world would move away from fossil fuels and toward clean energy. He noted that the U.S. Inflation Reduction Act ’s nearly $375 billion in climate incentives would be transformative for renewables in the country.

But he added that “the problem is not being fast enough to reach our climate targets.”

International Monetary Fund Managing Director Kristalina Georgieva, when asked for one thing she would change to accelerate the net zero transition, said she would lock the U.S., China, India and E.U. in a room and lock the door.

“Let them out after they sign in blood a commitment to work together to save the planet,” she said to applause from the audience at a Davos discussion on green finance.

Climate and sustainability have increasingly been major themes of the elite conclave in Davos, though it has faced criticism for being a talking shop that results in little direct action. This year, several sessions focused on the transition from fossil fuels to clean energy alongside panels on the slowing global economy, food insecurity and tech innovation.

The event kicked off with dozens of climate activists — some with clown makeup — braved snowfall on Sunday to wave banners and chant slogans at the end of the Davos Promenade.

Thunberg did not attend the latest U.N. climate conference, or COP, in Egypt last year, but Nakate, Neubauer and Gualinga took part in protests and sessions at the event.

“It should be those on the frontlines and not privileged people like me” speaking to leaders at high-level meetings, Thunberg said.

The conference came under criticism in recent days for installing the chief of the Abu Dhabi National Oil Co. as its president for this year’s event.

“It just sends this message of actually not taking it seriously,” Gualinga said.

“I think that Dr. Sultan al-Jaber is a terrific choice because he is the head of the company. That company knows it needs to transition,” Kerry said Sunday after attending an energy conference in Dubai. “He knows — and the leadership of the UAE is committed to transitioning.”

Former U.S. Vice President Al Gore, who’s leading an initiative to trace greenhouse gas emissions, said Thursday at Davos that fossil fuel companies were pumping three times the amount of planet-warming gases in the air than they were reporting.

“Most (other industries) are not this far off,” he said.

Thunberg arrived in Davos from Germany where she participated in a demonstration in a town being cleared for the expansion of a coal mine. Her boots were still covered in mud from the protest. She and several other high-profile activists were removed by police from the town on Tuesday.

“The level of action and frustration and anger that is there and one might even say desperation for me is a signal of what we need not only in Germany but around the world,” German climate envoy Jennifer Morgan told AP on Wednesday.

Morgan said that Davos attendees “are major decision-makers that if they were to really understand the 1.5 degree goal and take the action that’s required, it would make a massive difference.”

But she acknowledged that while they have a role, “they’re not the answer.”