BEIRUT (AP) — When Syrian rebels attacked a hideout in mid-October in the southern Syrian village of Jassem, they had no idea that a militant commander who was killed in the operation was the leader of the Islamic State group.

Syrian opposition activists and state media apparently did not know that the man killed was IS leader Abu al-Hassan al-Hashimi al-Qurayshi and identified him as Abu Abdul-Rahman al-Iraqi.

The operation lasted two days and started on Oct. 14, the day after a bombing on a bus in a suburb of the capital Damascus. That attack killed 18 Syrian soldiers and wounded at least 27 others.

Syrian state media at the time reported that authorities received information that IS members have hideouts in the northern neighborhoods of Jassem, about 60 kilometers (37 miles) south of Damascus. In the operation, Syrian troops were joined with former rebels who had reconciled with the government in 2018 and were allowed to stay and keep their weapons in the southern province of Daraa. State news agency SANA has said it was a joint operation against the suspected militant hideout.

Amid the intensity of the fighting, an Iraqi IS commander known as Abu Abdul-Rahman al-Iraqi, made his family escape from the house where he was staying and once they were out and he was totally surrounded, the Iraqi citizen detonated an explosive belt he was wearing, killing himself, according to Rami Abdurrahman who heads the Britain-based Syrian Observatory for Human Rights, an opposition war monitor.

In a nearby house, rebels surrounded and blew up the hideout of two other IS militants, a Lebanese and a Syrian, killing both of them, Abdurrahman said.

According to Syria’s state news agency SANA, three rebels were killed and seven others were wounded in the battle in Jassem that lasted since the late hours of October 14 until the next day. During the fighting, Syrian troops imposed a curfew on the village, SANA said.

The operation did not get much attention outside Syria at the time but on Wednesday, an IS spokesman released an audio saying that the group’s leader al-Qurayshi was killed in battle recently without giving further details.

“We were taken by surprise that the man killed was the leader of Daesh,” said Ahmed al-Masalmeh, who used an Arabic acronym for the Islamic State group. Al-Masalmeh is an opposition activist from Daraa who now lives in Jordan but remains in contact with rebels back home. He added that the information they had at the time was that the man killed was Abu Abdul-Rahman al-Iraqi who was believed to be the IS commander in southern Syria.

Al-Masalmeh said rebels in southern Syria had reliable information that a senior IS commander was based in the country’s south after another commander was killed in the summer in the region.

Hours after IS made the announcement, the U.S. military said al-Qurayshi was killed in mid-October adding that the operation was conducted by Syrian rebels in Daraa.

The latest killing shows that the three IS leaders, who were all Iraqis, were killed in Syria in recent years outside the areas the militant group once purported to rule. Two were killed by the U.S. military in Syria’s rebel-held northwestern province of Idlib while the third was killed in southern Syria far from the former domains of the so-called caliphate.

Little had been known about al-Qurayshi, who took over the group’s leadership following the death of his predecessor, Abu Ibrahim al-Hashimi al-Qurayshi, in a U.S. raid in February in northwest Syria.

The group’s founder Abu Bakr al-Baghdadi was hunted down by the Americans in a raid in Idlib in October 2019.

IS spokesman Abu Omar al-Muhajer said in the audio that Abu al-Hussein al-Husseini al-Qurayshi was named as the group’s new leader. 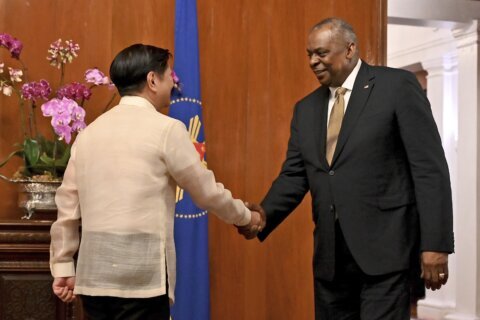