Growing pressure on Rwanda from France, Germany over Congo

NAIROBI, Kenya (AP) — International pressure is growing on Rwanda as France and Germany are the latest parties to openly accuse the country of supporting armed rebels in neighboring eastern Congo — with possible repercussions for foreign aid that Kigali has long enjoyed.

For months, renewed attacks by the M23 rebels have angered Congo’s government and led to talk of war in eastern Congo, a volatile region rich in minerals critical to much of the world’s technology. A report by United Nations experts earlier this year said they had “solid evidence” that Rwanda’s armed forces were backing the rebels, and the United States has openly asked Rwanda to stop it.

Now other major donors have joined the criticism of Rwanda. On Tuesday, France’s foreign affairs ministry in a statement condemned “Rwanda’s support for M23,” and its junior minister in charge of development during a visit to Congo warned that the M23 “must stop the fighting” and withdraw. The junior minister, Chrysoula Zacharopoulou, is in charge of implementing aid policies. France’s official development assistance to Rwanda leapt from under $4 million in 2019 to more than $68 million in 2021, according to Organization for Economic Cooperation and Development data, as relations improved.

Also on Tuesday, the German foreign ministry’s director for sub-Saharan Africa, Christoph Retzlaff, tweeted that Rwanda should “immediately cease” its support for the M23 and quickly contribute to a solution to the “disastrous” crisis. Germany’s official development assistance to Rwanda was more than $94 million in 2021.

Rwanda’s government in an emailed statement Wednesday evening said accusing it of supporting the M23 is “wrong” and that “attempting to manage complex situations by simply repeating and amplifying false allegations of the (Congolese) government cannot lead to solutions.” It accused the international community of being unwilling to face up to the root causes of conflict in eastern Congo, where dozens of armed groups are active.

Longtime President Paul Kagame last week on the sidelines of the U.S.-Africa summit denied that Rwanda had created the trouble in eastern Congo and called it “Congo’s problem.”

But concerns are growing that international partners could back their warnings with cuts in aid to Rwanda, which has long benefited from outside support in health, defense and other areas. Belgium, a former colonizer of Rwanda, also asked the country to stop supporting the M23 rebels earlier this month.

The public pressure on Rwanda over its alleged support of the M23 is notable. Human rights watchdogs and others have long accused Rwanda of using the international community’s guilt over its delayed response to the country’s horrific 1994 genocide to dampen criticism of its actions including the stifling of opposition at home and abroad.

The genocide killed more than 800,000 ethnic Tutsi and moderate Hutu who tried to protect them, and it remains a deeply sensitive subject. Rwanda’s president and his government in recent weeks have expressed concern for the ethnic Tutsi in eastern Congo who are affected by the current violence.

The M23 is largely made up of Congolese Tutsi. It has denied having the backing of Rwanda’s armed forces.

Rwanda in turn has accused Congo of backing another armed group in eastern Congo, the FDLR, a Hutu group opposed to Tutsi influence. Congo has denied it. Efforts at peace talks have yielded little as both sides accuse the other of breaking a fragile cease-fire agreed to last month in Angola.

Relations between Rwanda and Congo have been fraught for decades. Rwanda alleges that Congo gave refuge to the Hutus who carried out the genocide. In the late 1990s, Rwanda twice sent its forces deep into Congo, joining forces with Congolese rebel leader Laurent Kabila to depose the country’s longtime dictator Mobutu Sese Seko. The Rwandan forces in Congo were widely accused of hunting down and killing ethnic Hutu, even civilians.

One example of the significant aid that Rwanda continues to receive from partners is 20 million euros from the European Union, announced this month, to support its defense forces’ deployment against extremists in northern Mozambique.

Rwanda is considered to have one of the strongest militaries in Africa and is the third largest troop contributor to U.N. peacekeeping missions, according to the latest U.N. data in October.

The U.N. Security Council on Tuesday, while extending the peacekeeping mission in eastern Congo, demanded the immediate withdrawal of the M23 rebels. 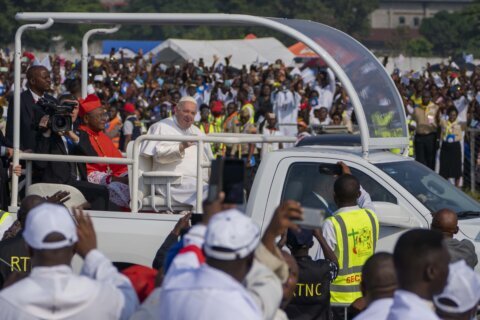