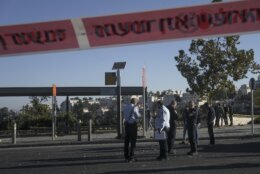 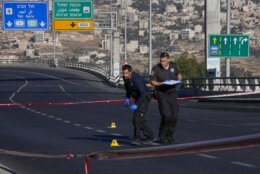 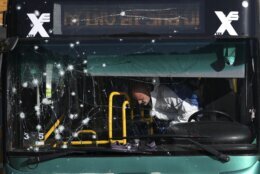 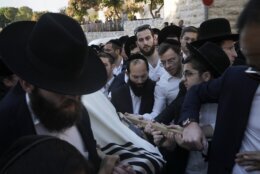 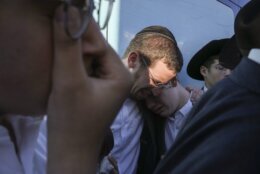 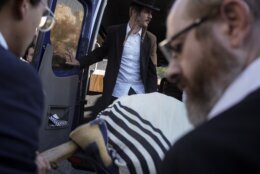 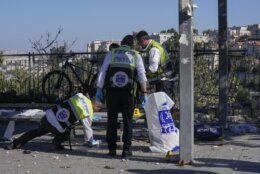 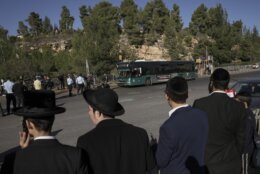 JERUSALEM (AP) — Two blasts went off near bus stops in Jerusalem at the height of morning rush hour on Wednesday, killing a Canadian-Israeli teenager and injuring at least 18, in what police said were attacks by Palestinians.

The first explosion occurred near a typically crowded bus stop on the edge of the city. The second went off about half an hour later in Ramot, a settlement in the city’s north. Police said one person died from their wounds and at least three were seriously wounded in the blasts.

The victim was identified as Aryeh Schupak, 15, who was heading to a Jewish seminary when the blast went off, according to a notice announcing his death. Schupak was also a Canadian citizen, according to Canada’s Ambassador to Israel Lisa Stadelbauer.

Tensions between Israelis and Palestinians have been surging for months, amid nightly Israeli raids in the occupied West Bank prompted by a spate of deadly attacks against Israelis that killed 19 people in the spring.

There has also been an uptick in recent weeks in Palestinian attacks. Israeli troops shot dead two Palestinians after what Israel said was an armed attack in the occupied West Bank.

The violence occurred hours after Palestinian militants stormed a West Bank hospital and carried out an Israeli citizen seeking treatment there after a car accident, according to the young man’s father. That incident could further ratchet up tensions.

“They can run, they can hide — it won’t help them,” he said in a statement. “We will punish them to the fullest extent of the law.”

The developments took place as former Israeli Prime Minister Benjamin Netanyahu is holding coalition talks after national elections and is likely to return to power as head of what’s expected to be Israel’s most right-wing government ever.

Itamar Ben-Gvir, an extremist lawmaker who has called for the death penalty for Palestinian attackers and who is set to become the minister in charge of police under Netanyahu, said the attack meant Israel needed to take a tougher stance on Palestinian violence.

“We must exact a price from terror,” he said at the scene of the first explosion. “We must return to be in control of Israel, to restore deterrence against terror.”

Police, who were searching for the suspected attackers, said their initial findings showed that shrapnel-laden explosive devices were placed at the two sites. The police said it deployed additional officers to the city in the aftermath of the blasts.

The twin blasts occurred amid the buzz of rush hour traffic and police briefly closed part of a main highway leading out of the city, where the first explosion went off. Video from shortly after the initial blast showed debris strewn along the sidewalk as the wail of ambulances blared. A bus in Ramot was pocked with what looked like shrapnel marks.

“It was a crazy explosion,” Yosef Haim Gabay, a medic who was at the scene when the first blast occurred, told Israeli Army Radio. “I saw people with wounds bleeding all over the place.”

While Palestinians have carried out stabbings, car rammings and shootings in recent years, bombing attacks have become very rare since the end of a Palestinian uprising nearly two decades ago.

The U.S. Embassy in Jerusalem condemned the violence, as did EU Ambassador to Israel Dimiter Tzantchev.

The Islamic militant Hamas, which rules the Gaza Strip and once carried out suicide bombings against Israelis, praised the perpetrators of the attacks, calling it a heroic operation, but stopped short of claiming responsibility.

“The occupation is reaping the price of its crimes and aggression against our people,” Hamas spokesman Abd al-Latif al-Qanua said.

Israel said that in response to the blasts, it was closing two West Bank crossings to Palestinians near the West Bank city of Jenin, a militant stronghold.

In Jenin late Tuesday, militants entered a hospital and removed the Israeli teen wounded in a car accident. The young man, 17, was from Israel’s Druze minority. His father, who was in the hospital room with him, said the militants disconnected him from hospital equipment and took him while still alive. The Israeli military said the young man was already dead when he was taken.

“It was something horrendous. It was something that was inhumane,” Husam Ferro, the teen’s father, told Israeli news site YNet. “He was still alive and they took him in front of my eyes and I couldn’t do anything.”

A Druze community leader told YNet talks were underway on the body’s return to the family. Palestinian militants have in the past carried out kidnappings to seek concessions from Israel. Lapid said the militants would “pay a heavy price” if the body was not returned.

More than 130 Palestinians have been killed in Israeli-Palestinian fighting in the West Bank and east Jerusalem this year, making 2022 the deadliest year since 2006. The Israeli army says most of the Palestinians killed have been militants. But stone-throwing youths protesting Israeli army incursions and others not involved in confrontations have also been killed.

At least eight Israelis have been killed in the most recent wave of Palestinian attacks.

The Israeli military said Wednesday that Palestinian gunmen opened fire on forces escorting worshippers to a flashpoint shrine in the West Bank city of Nablus overnight. The troops fired back and the Palestinian Health Ministry said a 16-year-old was killed in the incident, and hours later, it said Muhammed Abu Kishek, 22, also died from a gunshot wound to the stomach.

Israel captured the West Bank in the 1967 Mideast war, along with east Jerusalem and Gaza. The Palestinians seek the territories for their hoped-for independent state.

Ganassi adds another Kiwi in Armstrong to IndyCar lineup

US forces monitor Mideast skies at Qatar base amid World Cup