The cool night, made chillier by the air-conditioned outdoor stadium, left some fans wishing they had dressed warmer.

“Actually, it’s too cold,” said Faisal Rasheed, a 40-year-old Qatari fan who had come to see the host nation take on Ecuador after the seven-act opening ceremony. Wearing a maroon sweatshirt in the color of Qatar’s national flag and uniform, Rasheed said the air-conditioning was “working well,” but wondered whether it was needed on the windy, desert night.

Qatar lost the match 2-0 on a night when the outside temperature peaked at 23 degrees Celsius (74 degrees Fahrenheit).

The World Cup is being held in the winter months instead of the traditional June-July window after organizers moved it in 2015, five years after Qatar won the hosting rights, over concerns about how fans and players would fare under the country’s searing summer heat.

Qatar spent billions building seven air-conditioned, open-air World Cup stadiums. Organizers have trumpeted the technology behind the cooling systems in the long runup to the tournament, repeatedly saying that temperatures in the stands and playing field would hover around 20 degrees Celsius (68 degrees Fahrenheit), regardless of outside conditions.

The 974 Stadium in Doha is the only venue that will not be cooled, but it will host only night matches.

The Bedouin tent-shaped Al Bayt Stadium has a cooling station that sends chilled water to several air treatment units inside the venue. Some of the water used in the cooling process is recycled wastewater, stadium engineer Saud Ghani said.

Mario Sanchez, a 33-year-old U.S. fan, said he had traveled to Qatar from Chicago to watch 28 of the tournament’s 64 matches.

He said the technology’s real test would likely come on Monday during the first daytime match, between England and Iran, at 4 p.m. local time. 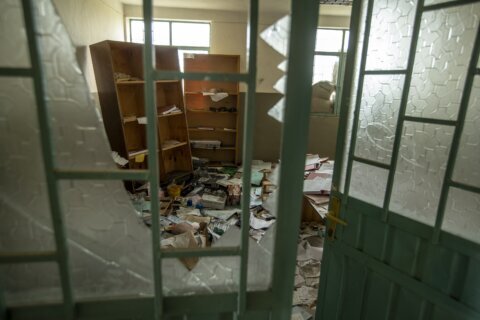