It was a big bounce back for the Americans, who hadn’t finished higher than fifth in four previous regattas this season, including a disappointing eighth in the nine-boat fleet in home waters in Chicago in June.

“This is a long time coming and it feels fantastic,” said Spithill, a two-time America’s Cup champion. “It’s a sign of strength for the team to get out there yesterday and then again today in completely different conditions. It’s been an all-around team effort — from the shore team, our coach Philippe Presti and of course the athletes. Everyone did an incredible job.”

The Americans earned their first Champagne celebration in tech tycoon Larry Ellison’s global league by staying ahead of their rivals in wind so light that the 50-foot catamarans struggled to get up on their foils.

“It’s really intense,” Spithill said. “Being in the lead is very difficult. It’s not clear where to go and things change so quickly.”

It was a dramatic change from brisk winds in Saturday’s three fleet races, when Spithill had a second and two thirds aboard his blue-hulled cat with an image of the Statue of Liberty on the wingsail. The Americans scored their first fleet race victory of the season in Sunday’s opener. The fifth fleet race was abandoned after no boat crossed the finish line inside the 14-minute race window and the sixth race was canceled.

Spithill did make a costly mistake when he bumped into the French boat during the fifth race, drawing a four-point penalty against their season points total. Although that race timed out and didn’t count, the penalty stands. The Americans remained in seventh place overall after five regattas. They’re nine points out of podium position with six regattas to go.

“My mistake, we clipped the back of the French boat,” said Spithill, an Australian who lives in San Diego with his American wife and their two sons. “We got stuck at the bottom gate and didn’t have much steerage. It wasn’t on purpose, or dangerous. Look, if boats touch, someone is going to lose some points, and yeah, we were in the wrong.”

Spithill took over as U.S. skipper at the start of Season 2. He got the Americans into the $1 million, winner-take-all grand finale in March in San Francisco, finishing third behind Australia’s Tom Slingsby and Japan’s Nathan Outteridge.

But the Americans struggled after making some crew changes at the start of this season.

”Look, there’s been a lot of noise and narrative about the team and changes we’ve made this season,” Spithill said. “I’m just really proud that we didn’t let it affect us and just focused on getting out there and taking it race by race. This is a great overall result for the team and a result of a lot of hard work. We knew we’d get there.”

Slingsby’s two-time defending SailGP champion Aussie team missed the podium race for the second straight regatta and leads New Zealand by one point in the season standings, with Britain seven more points back.

“The entire squad has a lot of confidence coming out of this event,” Spithill said. “Bring on Cádiz and let’s get after it.” 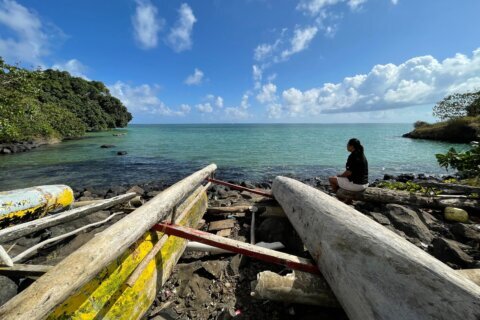