Wind blows Canada’s way in SailGP Chicago while US struggles

Phil Robertson’s Team Canada bounced back from a capsize earlier in the week to win two of three fleet races Saturday and take the lead in the United States Sail Grand Prix Chicago on Lake Michigan.

While the first-year Canadian team surprised the nine-boat fleet, Jimmy Spithill’s Team USA had a bad day in front of the home county fans by going 8-9-7 to tumble to last overall.

Canada scored 27 points to lead Sir Ben Ainslie and Britain by one point, with New Zealand four points off the lead. Canada’s 50-foot foiling catamaran was blown over during squall shortly after it hit the water for practice on Thursday. There were no injuries.

“I guess it fills us with more confidence that when it comes to race day, we can really push it,” said Robertson, a New Zealander who is skippering his third team in as many seasons of tech tycoon Larry Ellison’s global league.

Tom Slingsby and two-time defending champion Team Australia are fourth with 21 points followed by Denmark with 18 and Spain 17.

After two more fleet races on Sunday, the top three crews will advance to the podium race.

Team Canada had impressive starts in all three races. Teams had the choice of approaching the line from within the harbor or from beyond the harbor wall for a longer runup.

“We put a bit of time into assessing the different start options ahead of the race and it was pretty clear that you wanted to start outside the wall and come in fast,” Robertson said. “We managed to come ripping through the gap and come out a lot faster than everyone else.”

It was a tough day for the flight controllers who struggled to control their catamarans in the shifting wind and other unique challenges of Lake Michigan. This is the first freshwater regatta in SailGP’s three seasons.

The American crew struggled the most.

“We’re really disappointed. Certainly, all the fans deserve better,” Spithill said. “The main failing of the team was an inability to execute clean laps. It’s as simple as that. There were too many mistakes and too many errors.” 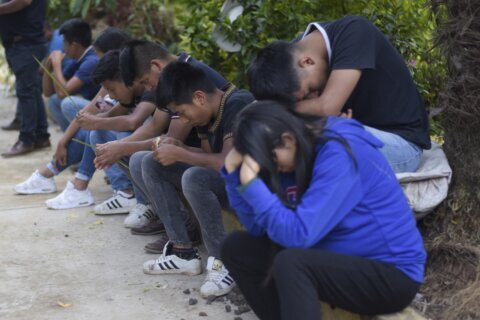