US vet jailed in Iran sues for $1 billion, alleges torture

A U.S. Navy veteran who was jailed in Iran for nearly two years sued the Iranian government on Thursday for $1 billion, alleging that he was kidnapped, held hostage and tortured.
Listen now to WTOP News WTOP.com | Alexa | Google Home | WTOP App | 103.5 FM

WASHINGTON (AP) — A U.S. Navy veteran who was jailed in Iran for nearly two years sued the Iranian government on Thursday for $1 billion, alleging that he was kidnapped, held hostage and tortured.

The federal lawsuit describes in unsparing detail the “prolonged and continuous” abuse that Michael White says he suffered behind bars, including being beaten and punched, whipped on his feet, deprived of food and drink, and pressured to falsely confess that he was a spy for the U.S. government.

“Mr. White endured this trauma for nearly two years, never knowing if or when he would be released and reunited with his family, repeatedly promised that his conditions would improve soon, only to be crushed psychologically when they did not,” the lawsuit states.

The allegations in the complaint mirror the claims made by White in a 156-page manuscript that he wrote behind bars and that was later obtained by The Associated Press.

The 31-page complaint traces White’s travel to Iran, saying he was lured there in the summer of 2018 by a woman he considered his girlfriend so that he could be kidnapped by Iranian government agents and put in prison. He was charged with insulting Iran’s Supreme Leader and cooperating with the U.S. government against Iran — charges the lawsuit says were fabricated — and sentenced without a trial to 10 years in prison.

The suit also alleges that White’s imprisonment was an effort by Iran to extract concessions from the Trump administration and to “manufacture additional leverage for diplomacy” in the aftermath of Iran’s withdrawal in 2018 from a landmark nuclear deal with the U.S. Diplomats are currently trying to salvage a deal that would bring Iran back into compliance with limits on its nuclear program.

The lawsuit was filed in federal court in Washington, D.C. Besides White, other plaintiffs include his mother and two brothers.

It was not immediately clear if Iran planned to formally respond to the complaint, or if it had a lawyer who might enter an appearance in the case. If Iran does not respond to the allegations, a judge could enter a default judgment on White’s behalf, enabling White to collect damages from a fund set up for victims of acts of state-sponsored terrorism.

The State Department arranged for his release in June 2020, flying him back to the U.S. as part of a deal that spared additional prison time for an American-Iranian doctor convicted in the U.S. of sanctions violations. White later made a videotaped appearance at that summer’s Republican National Convention in a segment with former President Donald Trump and other hostages and detainees freed during the Trump administration. 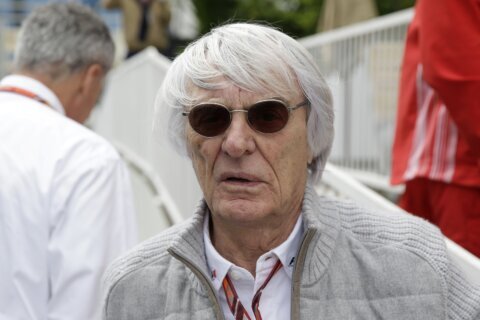