LONDON (AP) — Cristiano Ronaldo is racking up the records at the European Championship, and Associated Press photographers are capturing every special moment.

The Portugal captain scored a tournament-leading five goals in the first round at Euro 2020, and he celebrated one by jumping with his fist raised high after converting from the penalty spot against World Cup champion France.

Ronaldo scored that goal, and a couple others, at the Puskas Arena in Budapest — the only of the 11 host stadiums to allow a full crowd amid the coronavirus pandemic. He has now scored more than any other player in tournament history, and he also became first to score in five different European Championships.

There were many other memorable moments in the group stage of Euro 2020, and one very scary collapse.

Christian Eriksen suddenly fell face-forward during Denmark’s opening match against Finland in Copenhagen. Medical workers had to resuscitate him with a defibrillator as his teammates stood in a circle around the scene to form a protective shield.

Through the goals, the joy on the faces of the winners, and the not-so-joyous players on the losing side, the photos tell their own stories.

There is Wales forward Gareth Bale screaming in delight after a teammate’s goal in the win over Turkey in Baku.

Or Czech Republic striker Patrik Schick running with outstretched hands after scoring the longest goal in tournament history with a lob from near the halfway line against Scotland in Glasgow.

Not every picture has to do with players. There were also birds feeding on the field in Bucharest while Ukraine was playing North Macedonia, and fans cheering on their teams all over Europe.

More memorable moments, and memorable pictures, are sure to come when play resumes in the knockout stages. 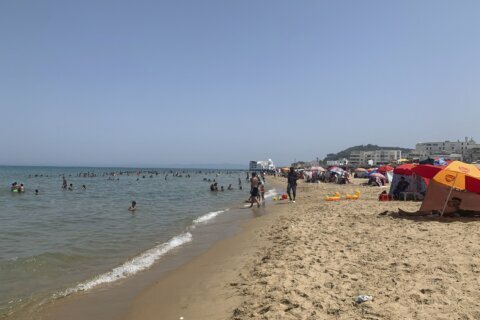 With no government, it’s worry, trust and wait in Tunisia

EU to aid Lithuania amid swelling migrant flows from Belarus