LONDON (AP) — While the cream of Britain’s and Ireland’s rugby players are in South Africa, their national teammates will have tests of their own in the July window.

England, Wales, and Ireland could have crowds in attendance, while Scotland is going to Romania and Georgia in a schedule forged by World Rugby after the test windows last June and November were canceled.

The northern hemisphere teams usually head to the south in July, but the effects of the coronavirus pandemic have drawn many teams to Britain and Ireland, where restrictions on public life are being increasingly eased as vaccine rollouts reduce the risk of deaths and transmission.

France has already confirmed two tests in Australia, but Italy has canceled its two-test tour of New Zealand. Italy is the highest-ranked team to go without a match in July.

“The current conditions made it preferable for the national team to concentrate energies ahead of the autumn series,” the Italy Rugby Federation said.

Italy will host the All Blacks in the autumn as some consolation.

Instead of going to North America, England is bringing the United States and Canada to Twickenham on July 4 and 10 respectively.

The English Rugby Football Union hopes to sell 10,000 tickets to each game, “with the potential to increase these numbers if government guidelines allow in the coming weeks.”

They would be the first supporters at 82,000-seat Twickenham since 2,000 were allowed at the Autumn Nations Cup final last December.

With 11 England players picked for the Lions, coach Eddie Jones said, “The summer series will give us the chance to look at a lot of players and see how they step up, and it’s an important part of our (2023 Rugby) World Cup preparation.”

Wales’ alternative to canceling a tour of Argentina and Uruguay has been to attract the Pumas to Cardiff for two tests and a first visit by Canada since 2008.

The Canada test is on July 3, followed by Argentina on the next two Saturdays.

“With those (10 Welsh Lions) players away we always earmarked this summer as an important development opportunity for us,” Wales coach Wayne Pivac said.

“It is an opportunity to bring players into this environment, look at them closely and expose them to test match rugby. It is also an opportunity for current internationals to step up into further leadership roles, so on both counts it is an important camp for us.”

Japan is giving the Lions a pre-tour warmup match in Edinburgh on June 26, and staying on to play Ireland on July 3 at Lansdowne Road.

The Irish will also face the United States at home on July 10.

Scotland, to be coached by assistant Mike Blair in the absence of Gregor Townsend on the Lions tour, is going to Romania on July 10 in Bucharest, and Georgia the following weekend.

Georgia will be home after giving South Africa two warmup tests before the Lions series.

Australia’s home series against France on July 7 and 13 appears to be the most competitive away from the Springboks-Lions contests.

Without Italy in town, the All Blacks have lined up Fiji for home tests on July 10 and 13.

New Zealand will also be the hub for Rugby World Cup qualifiers between Tonga and Samoa.

There will also be qualifiers in Africa and South America. 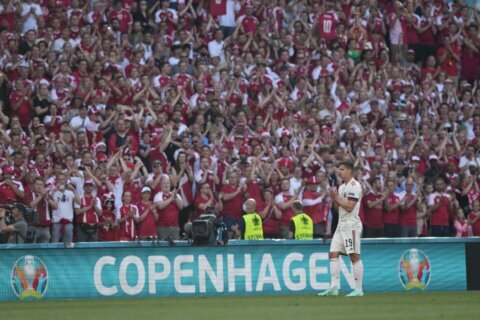