MILAN (AP) — The former European Central Bank chief credited with helping to save the euro has now been tapped to lead Italy, the eurozone’s third-largest economy, out of the pandemic and the worst recession since World War II.

Mario Draghi gained global respect as the head of the European Central Bank for eight years, managing monetary policy for the 19 countries that use the euro, with an economy worth 12 trillion euros ($14.4 trillion). Draghi, 73, not only has an insider’s grasp of the financial rule book that Italy must follow, but he has the respect of those whose forbearance Italy may require during the difficult months and years ahead.

“When Draghi picks up the phone to call the White House, President Joe Biden will answer. Because it is Mario Draghi,’’ the deputy manager of the leading Milan Daily Corriere della Sera, Daniele Manca, said on Wednesday. “The same goes for (German Chancellor) Angela Merkel and (Chinese President) Xi Jinping.”

A seasoned treasury official who became Italy’s and then Europe’s top central banker, Draghi brings gravitas, crisis management, and market savvy to the job of governing Italy out of a pandemic and the resulting economic crisis. President Sergio Mattarella tapped him to form a broad-based government after squabbling among Italy’s coalitions parties over the virus response led Premier Giuseppe Conte to resign.

Financial markets welcomed the prospect of a Draghi government. Italy’s borrowing costs on its debt, the second-highest in relation to GDP in Europe, sank, while stocks rallied 2%. One financial analyst summed up the sentiment with the subject line: “We like Mario Draghi!”

Draghi is not afraid of venturing bold solutions to big problems. When the eurozone was facing a crisis of confidence in 2012, he famously told a conference in London that the ECB would do “whatever it takes to preserve the euro. And believe me, it will be enough.” That promise, backed with new ECB policies, helped stabilize markets that threatened to break up the euro.

He took a pragmatic approach during the financial crisis. He expanded the range of the ECB’s stimulus policies to include large-scale bond purchases. He also oversaw the ECB’s move to become the main banking supervisor after failing banks played a key role in the eurozone’s troubles.

His recent tenure leading the ECB, ending Oct. 31, 2019, positions him well to help Italy navigate its difficulties and also some 200 billion euros in EU recovery funds.

If Italy needs to tap the ECB’s bond-market backstop, which aims to keep euro countries’ sovereign borrowing costs from spiking to unaffordable levels, there’s no one better than Draghi: he oversaw the backstop’s design and unveiling in 2012.

He would also be intimately familiar with the complexities of the European bailout fund created during the eurozone debt crisis.

Draghi joined the ECB as its third chief in 2011, just as Italy was engulfed in a debt crisis. As ECB president-designate, Draghi and then-ECB head Jean-Claude Trichet intervened in Italian politics through an August 2011 letter to then-Premier Silvio Berlusconi demanding reforms to cut the deficit, improve growth and deal with a financial markets crisis that threatened to break up the euro.

The ECB then started buying Italian bonds to stabilize the government’s borrowing costs in what appeared to be an unstated quid pro quo. The ECB denied there was any deal. The ECB bond purchases did not take pressure off the government as Berlusconi’s efforts at economic reform faltered; Berlusconi resigned in November 2011 and he was replaced by technocrat Mario Monti.

Born in Rome, Draghi graduated from La Sapienza University there with a degree in economics and earned his Ph.D in 1976 at the Massachusetts Institute of Technology, where he studied under Nobel laureate Franco Modigliani. Among his fellow students at MIT was Ben Bernanke, the future head of the Federal Reserve. He taught at the University of Florence, and also served as a top official at the World Bank, based in Washington.

Draghi served from 1991 to 2001 as a top official at the Italian Treasury, under governments with a range of orientations, from conservative Berlusconi to former communist Massimo D’Alema. He oversaw the privatization of Italy’s state-owned industries and helped Italy get its finances in shape to join the euro as a charter member in 1999.

Many in Italy had hoped Draghi would be available to take over when President Sergio Mattarella’s term ends in 2022, unsullied by Italian politics. The largely ceremonial role proves key in helping manage Italy’s all-too-frequent political crises, which require deft negotiations and unassailable knowledge of Italy’s constitution and institutions.

While it cannot be ruled out that Draghi could succeed Mattarella as president in just about a year, the chances are slim given the enormity of the tasks facing Italy and the timing of the crisis.

Draghi comes with some baggage. As a central banker involved in supervising tough austerity policies imposed on some European countries during the crisis, he has been viewed skeptically in some corners as someone who defers to financial interests. A stint at investment bank Goldman Sachs will only magnify any criticism.

Few are the Italians who have been able to parlay success abroad into success at home. Monti, a former EU commissioner, was widely credited with helping Italy recover from the 2011 debt crisis, but his legacy was muddied when he formed his own party and ran in the subsequent national election.

Any Draghi government is likely to be short-lived. The current parliament’s mandate extends for another two years. But analysts say Draghi’s term might be even shorter.

“A very plausible scenario is that, after vaccinations are completed and the economy starts to recover, parties withdraw their support and ask for new elections,” said the chief Italian economist for Oxford Economics, Nicola Nobile. That would most likely happen next spring, after a new president is appointed.

The Latest: Ontario wants vaccine shot in adults by June 20 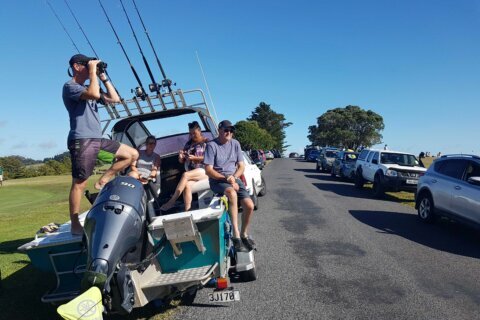