MEXICO CITY (AP) — EDITOR’S NOTE: The quarterfinal match at the 1986 World Cup encapsulated both the best and worst of Diego Maradona, who died Wednesday at the age of 60.

He scored one of soccer’s most astounding goals, weaving through England’s midfield and defense before finding the back of the net. But, in one of the most infamous cheats in sports’ history, he also sneaked another past goalkeeper Peter Shilton by knocking the ball in with his left hand. Adding insult to injury, he later coined one of the most infamous phrases in soccer history, crediting that goal to the “Hand of God.”

AP Sports Writer Barry Wilner covered that famous match for The Associated Press. Thirty-four years later, the AP is making a version of his story available with photos.

Diego Maradona, Argentina’s brilliant striker, insisted that his team’s World Cup quarterfinal game with England was “soccer, nothing else.”

As if to prove his point, Maradona scored twice to lead Argentina past England 2-1 Sunday in the first major sporting contest between the nations since the 1982 Falklands War.

Maradona was right. Though there was a minor altercation in the stands at Aztec Stadium, on the field there was soccer — nothing else.

And Maradona was at his masterful best.

“I believe that he demonstrated that he is the best player in the world,” Argentine coach Carlos Bilardo said after Maradona scored at 51 and 55 minutes. “I think he is a true idol.”

Argentina, which won the 1978 World Cup, will play Belgium in the semifinals Wednesday at Aztec Stadium. The surprising Belgians, only third in Group B during the first round, edged Spain 5-4 on penalty kicks at Puebla.

It was the second big upset for Belgium, which beat the Soviet Union 4-3 in extra time in the second round.

Jan Ceulemans’ first-half goal was equaled by Juan Senor’s shot with only five minutes left in regulation time. After the scoreless overtimes, Belgium hit all five of its penalty kicks.

But goalie Jean-Marie Pfaff stopped Spain’s second try, by Eloy Oyala, and that was the difference.

It will be Belgium’s first appearance ever in the semifinals.

France takes on West Germany in the other semifinal on Wednesday. The French beat Brazil and the Germans downed host Mexico in penalty-kick shootouts on Saturday.

Although there was a dispute about his first goal, which England claimed went in off of Maradona’s hand, not his head, there was no arguing about his other score. It was a thing of beauty.

The squat, powerful and quick Maradona dribbled through three English players, around goalkeeper Peter Shilton and then poked the ball into the net from short range.

“Diego always scores spectacular goals, and that second one today was perhaps the best I’ve seen him score,” Bilardo said.

But Robson disputed the first goal.

“No ifs or buts about it,” Robson said. “Peter Shilton felt deeply aggrieved. He doesn’t like to be beaten and it was obvious that Maradona had not got his head to it, but his hand.

“That goal, which should never have been allowed, gave Argentina the edge. It was a bad refereeing decision and you don’t expect one like that at World Cup level.”

As for his other goal, he said it was “not the best of my career, but the most important because it allowed us to clinch the victory.

“We can talk other days about my goals,” he said. “Today, let’s talk about the win.”

England crawled back within a goal when Gary Lineker headed in a pass by John Barnes with 10 minutes to go. It was a tournament-leading sixth goal for Lineker.

The victory was Argentina’s first over England in World Cup competition. The English won in 1962 and 1966.

The triumph also prevented an all-European semifinal. No team from outside South America has won the title when the tournament was held in the Western Hemisphere.

A scuffle erupted in the sellout crowd of 114,580 after an English fan carrying a Union Jack walked into a section of the stands behind the Argentina goal. Argentine fans grabbed the flag and ripped it apart.

A few minutes later, more English fans challenged the Argentine fans in the same section, and fistfights broke out. One fan was seen falling over two rows of seats after being struck.

After initially holding back, six Mexican riot police entered the area, separated the fans and ordered them to sit down.

After the game, a group of English fans began throwing beer bottles at the entrance of a Mexico City hotel. They also shouted anti-Argentine slogans.

Two policemen chased the English fans and held them at gun point for several minutes. Police Lt. Jesus Gonzalez said no one was arrested and the action was taken to discourage further incidents.

British diplomat Keith Bevin said he had been told by British supporters that the incident was sparked by a group of Argentine fans who ganged up on two English fans in a car.

The AP Corporate Archives contributed to this report. 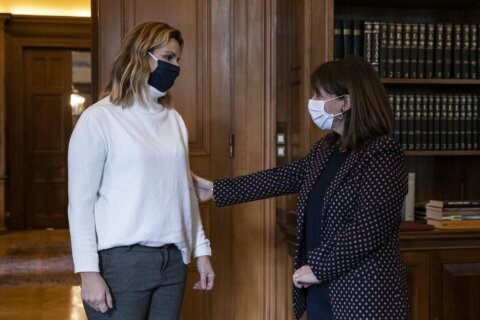