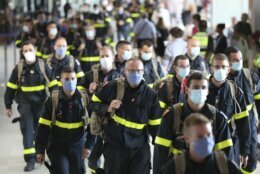 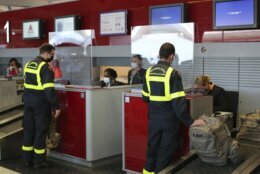 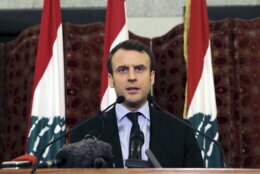 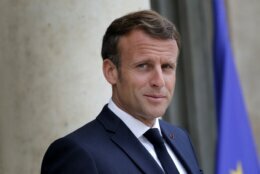 PARIS (AP) — As Lebanese rescuers counted the dead and combed rubble for signs of life a day after a huge explosion shattered swaths of Beirut, nations near and far pledged Wednesday that the country, already trapped in a deep economic crisis, would not be left alone.

The explosion at the capital’s port that killed at least 135 and injured thousands, with shock waves smashing deep into the city, stunned the world. From Australia to Indonesia to Europe and the United States, countries readied to send in aid and search teams.

Reflecting both the gravity of the disaster and France’s special relationship with its former protectorate, French President Emmanuel Macron was to visit Lebanon Thursday. Paris wasted no time in dispatching two planeloads of specialists, rescue workers and supplies to Beirut on Wednesday.

The blast appeared to have been triggered by a fire that touched off a giant quantity of ammonium nitrate fertilizer stored for years in the port, which exploded with the force of a moderately strong earthquake.

The disaster comes atop the worst economic crisis in Lebanon’s modern history, and hesitancy among some backers, including France, to keep propping up a country in dire need of reform.

The European Union was activating its civil protection system to round up emergency workers and equipment from across the 27-nation bloc. The EU commission said the plan was to urgently dispatch over 100 firefighters with vehicles, sniffer dogs and equipment designed to find people trapped in urban areas.

The Czech Republic, Germany, Greece, Poland and the Netherlands were taking part in the effort, with other countries expected to join. The EU’s satellite mapping system will be used to help Lebanese authorities establish the extent of damage.

Russia flew in a mobile hospital, along with 50 emergency workers and medical personnel. Another three Russian flights were scheduled to arrive within the next 24 hours, carrying equipment for a coronavirus testing lab and protective gear, among other relief supplies.

He said the aid will be provided to the World Food Program and to the Red Cross for food, medical care and essential items.

Help also was coming from closer to home. Iraq was sending six trucks of medical supplies and an emergency medical team to help bolster Lebanon’s overstretched health system, and Egypt and Jordan were supplying field hospitals.

Tunisia was sending medical teams, and offered to bring 100 patients back for treatment in Tunisia.

In a mark of respect for victims, a U.N.-backed tribunal postponed until Aug. 18 the delivery of judgments in the trial of four people charged with involvement in the 2005 assassination of former Lebanese Prime Minister Rafik Hariri. The verdicts were to be read out Friday in a Netherlands courtroom.

Even Israeli Prime Minister Benjamin Netanyahu said his country, officially in a state of war with Lebanon, stood ready to offer to assist the Lebanese “as human beings to human beings.”

U.N. peacekeepers from Indonesia already stationed in Lebanon were helping in the evacuation effort, and Australia said it was donating 2 million Australian dollars ($1.4 million) in humanitarian support.

But the pledges of aid raised new questions for a country whose economic and political crisis, combined with endemic corruption, have made donors wary in recent years.

In a visit to Lebanon less than two weeks ago, French Foreign Minister Jean-Yves Le Drian made clear that France, Beirut’s steadfast economic backer, would withhold support not destined directly to the Lebanese population, until “credible and serious reform measures” get under way.

Whether the French president would skirt his country’s own no-go zone and offer more than emergency aid was unclear. About $11 billion was pledged to Lebanon at a 2018 Paris conference — but on condition reforms are undertaken.

U.S. Secretary of State Michael R. Pompeo reaffirmed “our steadfast commitment to assist the Lebanese people” in a phone call with Prime Minister Hassan Diab, according to Deputy Spokesperson Cale Brown. It was unclear what support might be forthcoming.

The World Health Organization is airlifting medical supplies to Lebanon to cover up to 1,000 trauma interventions and up to 1,000 surgical interventions, following a request from the country’s health minister.

WHO spokesman Tarik Jasarevic said in an e-mail that supplies were to be airlifted from a “humanitarian hub” in Dubai in the United Arab Emirates and expected to arrive later Wednesday.

U.N. deputy spokesman Farhan Haq said it was too early to say if the U.N. will issue an international appeal to help rebuild Beirut.

“It would seem given the amount of damage that there will be a need for additional international support for Lebanon,” he said, adding that the U.N. is heartened to see support from many governments and hopes all countries will stand beside the Lebanese people at this time.

Pope Francis offered prayers for the Lebanese, while in Paris a special vigil was to be held late Wednesday in the Notre Dame Maronite Church. The Eiffel Tower will go dark at midnight in mourning.

Sylvie Corbet in Paris, Lorne Cook in Brussels, Jamey Keaten in Geneva and bureaus around the world contributed.