Welcome to Orcland: Lord of the Rings to film in New Zealand

WELLINGTON, New Zealand (AP) — Amazon announced Wednesday it will film its upcoming television series “The Lord of the Rings”…

WELLINGTON, New Zealand (AP) — Amazon announced Wednesday it will film its upcoming television series “The Lord of the Rings” in New Zealand, marking a return of the orcs, elves and hobbits to the country they became synonymous with over the course of six movies directed by Peter Jackson.

Amazon Studios said it had found a great location with world-class sets and skilled staff. It said pre-production had already started and production on the series would begin in the city of Auckland over the coming months.

“As we searched for the location in which we could bring to life the primordial beauty of the Second Age of Middle-earth, we knew we needed to find somewhere majestic, with pristine coasts, forests, and mountains,” showrunners and executive producers J.D. Payne and Patrick McKay wrote in a statement.

But Amazon wouldn’t reveal the extent of its plans for the series. It declined to say how much it plans to spend, how many seasons the show will run, or when it will debut.

Some have speculated Amazon could spend more than $1 billion on the series as it looks to take on other streaming services like Netflix with its Prime Video service.

New Zealand’s Economic Development Minister Phil Twyford welcomed the news, saying the series would give a boost to the screen industry and create hundreds of new jobs.

“It’s a hugely significant piece of popular culture,” Twyford said. “And it now has a special place in New Zealanders hearts as well. We are part of Middle-earth.”

The series will be eligible for a 20% screen grant rebate that will be funded by taxpayers. The conservative lobby group Taxpayers’ Union said the rebate meant every New Zealand household could end up paying more than $100.

“Who would seriously name Amazon as the most deserving recipient of our hard-earned tax dollars?” the group wrote in a release.

But Twyford said it will be money well spent.

“This is not a charity issue,” he said. “This is about bringing jobs, investment, and economic development to New Zealand.”

The series will be based on the fantasy novels by J.R.R. Tolkien. Amazon said it would explore new story lines that precede “The Fellowship of the Ring.”

The show won’t be connected with the New Line Cinema movies, although Jackson has previously said he’d be interested in helping out. “The Lord of the Rings” movie trilogy and “The Hobbit” movie trilogy combined grossed nearly $6 billion at the box office. 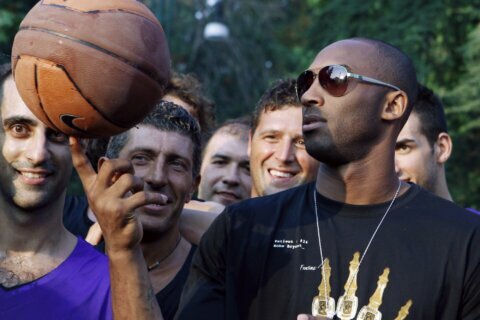