President Biden reiterated that he will run for reelection in 2024, adding that he'll do so if he's in good health, like he is now. Mr. Biden made the remarks in an interview with ABC News' David Muir.
Listen now to WTOP News WTOP.com | Alexa | Google Home | WTOP App | 103.5 FM

President Biden reiterated that he will run for reelection in 2024, adding that he’ll do so if he’s in good health, like he is now. Mr. Biden made the remarks in an interview with ABC News’ David Muir.

“Yes,” Mr. Biden said when asked if he still intends to run for reelection. “But look, I’m a great respecter of fate. Fate has intervened in my life many, many times. If I’m in the health I’m in now, if I’m in good health, then in fact, I would run again.”

Mr. Biden has said before that he expects to run again. That would include a potential run against former President Donald Trump, if he’s the GOP nominee, the president said.

“Why would I not run against Donald Trump if were the nominee? That would increase the prospect of running,” Mr. Biden told Muir.

The president also echoed something else Harris said recently, that the administration didn’t see the Delta or Omicron variants coming. Muir asked Mr. Biden how the White House got it wrong.

“How do we get it wrong?” Mr. Biden laughed. “Nobody saw it coming. Nobody in the whole world. Who saw it coming?”

As demand outstrips supply for rapid COVID-19 tests in some parts of the country, the president insisted on Tuesday the testing shortage is “not a failure.” The White House is working on making 500 million rapid tests available for Americans to request on a website.

“I don’t think anybody anticipated that this was going to be as rapidly spreading as it did,” he told reporters. 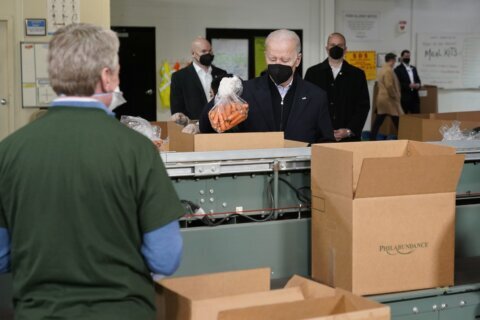