President Biden will address the American people Tuesday afternoon following the end of the nation's two-decade-long war in Afghanistan, which came to a close Monday with the departure of the final U.S. military aircraft from the main airport in Kabul.
Listen now to WTOP News WTOP.com | Alexa | Google Home | WTOP App | 103.5 FM

Washington — President Biden on Tuesday defiantly defended his decision to withdraw from Afghanistan by August 31, a withdrawal that ended a two-decade-long war when the final final U.S. military aircraft from the main airport in Kabul.

“I was not going to extend this ‘forever war,’ and I was not extending a ‘forever exit,'” the president told the nation in a Tuesday afternoon address.

“No nation has ever done anything like it in all of history,” the president said of the massive U.S. evacuation efforts. “Only the United States had the capacity and the will and the ability to do it, and we did it today.” 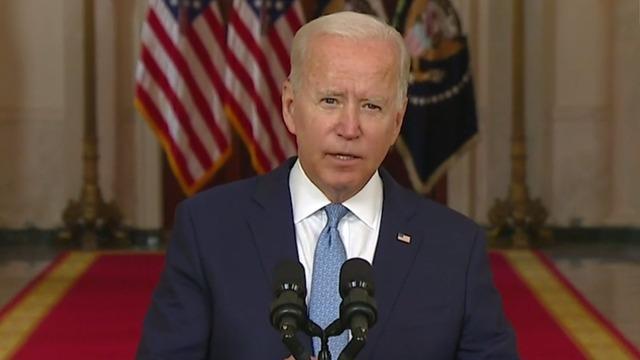 Biden speaks about end of war in Afghanistan

He also sought to emphasize that the effort to move Americans out of Afghanistan began earlier than most were aware, stating that the U.S. “reached out to Americans in Afghanistan 19 times with multiple warnings and offers to help them leave Afghanistan, all the way back as far as March.”

Now, he said, 100 to 200 Americans remain in the country. He said most of them are dual citizens with roots in Afghanistan. The Pentagon admitted Monday that there were Americans who wanted to leave, but were not able to make it to the airport in the final hours before the U.S. departed.

“The bottom line, 90% of Americans in Afghanistan who wanted to leave were able to leave,” the president said. “And for those remaining Americans, there is no deadline. We remain committed to get them out if they want to come out.”

CBS News has learned there are approximately 300 Americans still in Afghanistan, and the State Department has contacted roughly half of them. When White House press secretary Jen Psaki was asked after the president’s speech if the president made a mistake in promising that the U.S. would remain in Afghanistan until all Americans are out, Psaki said, “We are going to get every American citizen out. That has not changed.”

In his address, the president mourned the 13 American service members who died in an attack last week at the Kabul airport, as they worked to help with the evacuation effort. He vowed the U.S. would never forget them.

Mr. Biden also addressed some of the most common critiques of his administration’s handling of the withdrawal, including criticism that Americans and vulnerable Afghans should have been evacuated much sooner than mid-August.

“I take responsibility for the decision,” the president said. “Now some say you should’ve started mass evacuations sooner and couldn’t this have been done in a more orderly manner. I respectfully disagree.”

“Imagine, if we’d begun evacuations in June or July bringing in thousands of American troops and evacuating more than 120,000 people in the middle of a civil war — there still would have been a rush to the airport, a breakdown of confidence in control of the government, and it still would have been very difficult and a dangerous mission,” he argued, adding, “The bottom line is, there is no evacuation from the end of a war that you can run without the kinds of complexities, challenges and threats we faced. None.”

He also said that it was his predecessor, former President Trump, who had originally signed an agreement with the Taliban to remove U.S. troops by May 1, months after Mr. Biden’s inauguration. The Trump administration’s agreement, he said, “included no requirements that the Taliban work out a cooperative governing arrangement with the Afghan government, but it did authorize the release of 5,000 prisoners last year,” including some of the Taliban’s top war commanders, some of whom “just took control of Afghanistan.”

The U.S. completed its airlift of tens of thousands of evacuees hours before Mr. Biden’s August 31 deadline for the military presence in Afghanistan to end. More than 122,000 people were flown out of the country since late July by U.S. military and coalition aircraft, including at least 5,526 U.S. citizens.

Mr. Biden announced in April that all U.S. military forces would leave Afghanistan by September 11, the 20th anniversary of the terror attacks that launched the military effort there. The president then announced in July the withdrawal would conclude August 31, ahead of his initial deadline.

But with the Taliban’s swift takeover of the country, culminating in Afghan President Ashraf Ghani fleeing the country and the collapse of the Afghan government, more than 5,000 U.S. troops were sent to Kabul to assist with evacuations of U.S. citizens and Afghans who aided American forces during the 20-year war.

The president faced pressure to extend his August 31 deadline to complete the U.S. exit from Afghanistan, but he said in a statement Monday that top military officials unanimously recommended the airlift mission end as planned.

Mr. Biden warned last week that U.S. forces on the ground in Kabul faced growing threats with each day they remained, and the final days of the war saw the deadliest day for U.S. troops in more than a decade.

A suicide bombing on Thursday by a member of the group ISIS-K, an affiliate of the terrorist group ISIS, killed at least 169 Afghans and 13 U.S. service members. In retaliation for the attack, the U.S. launched two airstrikes against ISIS-K targets.

On Tuesday, the president said the end of the war in Afghanistan marks the “end of an era.”

Christina Ruffini contributed to this report. 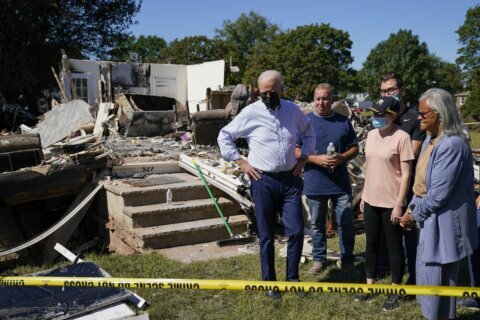