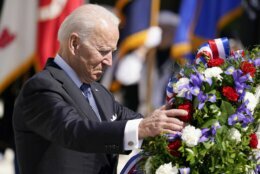 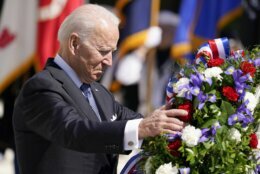 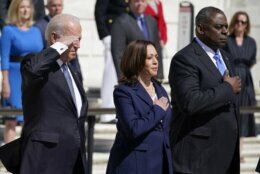 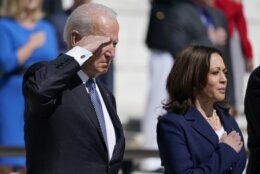 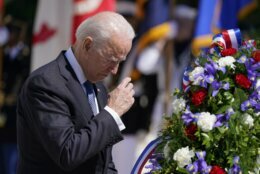 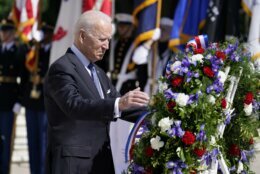 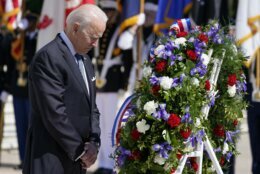 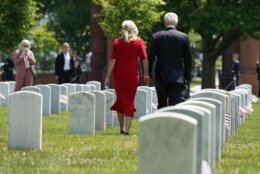 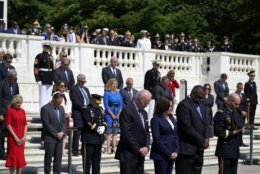 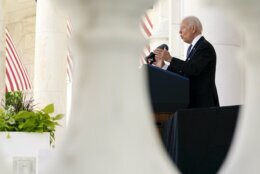 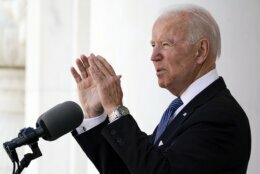 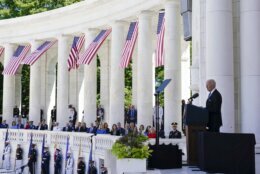 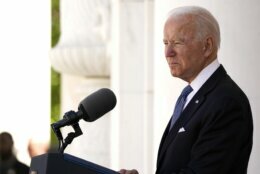 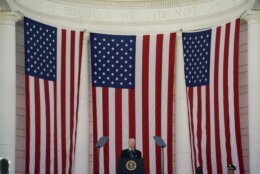 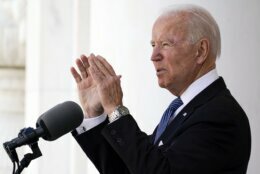 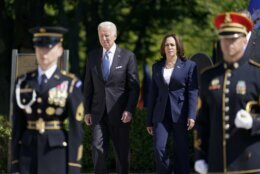 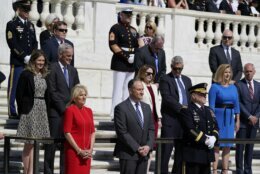 ARLINGTON, Va. (AP) — President Joe Biden honored America’s war dead at Arlington National Cemetery on Memorial Day by laying a wreath at the hallowed burial ground and extolling the sacrifices of the fallen for the pursuit of democracy, “the soul of America.”

Biden invoked the iconic battles of history and joined them to the present as he implored Americans to rise above the divisions straining the union, which he described in stark terms.

The president was joined Monday by first lady Jill Biden, Vice President Kamala Harris and second gentleman Doug Emhoff in a somber ceremony at the Virginia cemetery’s Tomb of the Unknown Soldier, which is dedicated to deceased service members whose remains have not been identified.

His face tight with emotion, Biden walked up to the wreath, cupping it in his hands in silent reflection, then making the sign of the cross. His eyes were wet. The gathered dignitaries and military families were hushed and solemn; the chattering of cicadas loud.

In remarks that followed, Biden called on Americans to commemorate their fallen heroes by remembering their fight for the nation’s ideals.

“This nation was built on an idea,” Biden said. “We were built on an idea, the idea of liberty and opportunity for all. We’ve never fully realized that aspiration of our founders, but every generation has opened the door a little wider.”

He focused much of his speech on the importance of democracy, saying it thrives when citizens can vote, when there is a free press and when there are equal rights for all.

“Generation after generation of American heroes are signed up to be part of the fight because they understand the truth that lives in every American heart: that liberation, opportunity, justice are far more likely to come to pass in a democracy than in an autocracy,” Biden said. “These Americans weren’t fighting for dictators, they were fighting for democracy. They weren’t fighting to exclude or to enslave, they were fighting to build and broaden and liberate.”

But he suggested these ideals are imperiled.

“The soul of America is animated by the perennial battle between our worst instincts, which we’ve seen of late, and our better angels,” he said. “Between Me First and We the People. Between greed and generosity, cruelty and kindness, captivity and freedom.”

After the ceremony, the Bidens stopped by a row of gravestones in a cemetery where some 400,000 are buried in the gentle hills and hollows.

The Bidens held hands and strolled along the rows of Section 12, one of the primary burial locations of service members killed overseas and repatriated to the United States after World War II and the Korean War. They stopped to chat with several families visiting the graves of their loved ones or searching for them — one family came to find a great-uncle missing in action from the world war.

Defense Secretary Lloyd Austin and Mark Milley, chairman of the Joint Chiefs of Staff, joined Biden and Harris in the ceremony.

On Sunday, Biden addressed a crowd of Gold Star military families and other veterans in a ceremony at War Memorial Plaza in New Castle, Delaware. Earlier in the day, he and other family members attended a memorial Mass for his son Beau Biden, a veteran who died of brain cancer six years ago to the day.

‘I’m a partner on this journey’: Jill Biden on her role as first lady during debut foreign trips