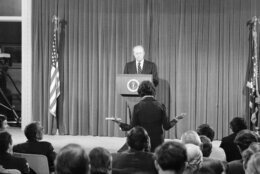 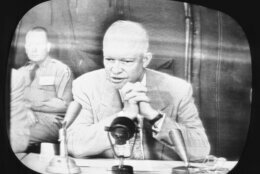 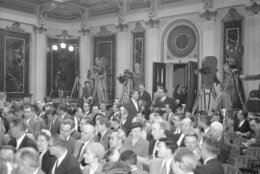 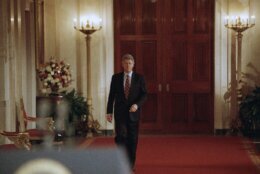 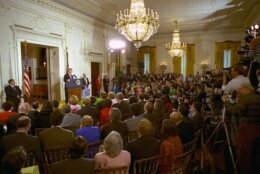 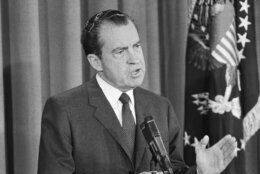 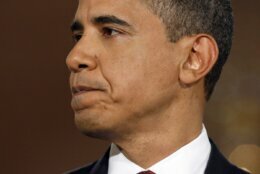 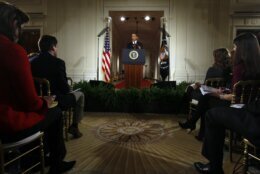 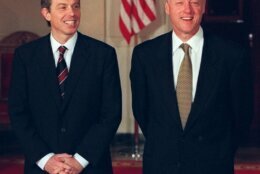 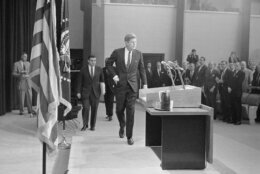 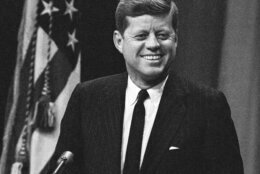 WASHINGTON (AP) — He’d led allied armies in the defeat of Nazi Germany only to find himself, a decade later, a tad intimidated before the cameras in an echoey room of the Old Executive Office Building, ready to make history again.

“Well, I see we’re trying a new experiment this morning,” President Dwight Eisenhower told the press corps. “I hope that doesn’t prove to be a disturbing influence.” It was the first presidential news conference captured for broadcast by television. In the scratchy black and white of 1955 TV sets, Americans saw those trademark Ike grins and heard him beef about being asked a “loaded question.”

With that, an enlightening, contentious and often showboating tradition came into the modern age, one President Joe Biden carries on Thursday with his first White House news conference. Stay tuned for any disturbing influences.

Depending how you count, Biden is a little or a lot behind his recent predecessors in opening himself to questions in what historian Martha Joynt Kumar calls the “high-risk, high-reward” enterprise of presidential news conferences.

The last four presidents, back to Bill Clinton, each held one solo White House news conference in their first 60 days, picking up the pace to varying degrees later.

The Biden White House is a notably tight ship, fully aware of his history of flubs, as is Biden himself, a self-described “gaffe machine.”

He went through the 2020 campaign with infrequent news conferences and often hunkered down in the pandemic. Yet he debated fellow Democrats a dozen times and Trump three times without apparent harm to his prospects or the country.

In recent weeks, his lack of a news conference had become, well, news itself, with reporters pressing the White House for more access to the president and some conservatives claiming that Biden was hiding something. Recognizing that the moment would draw a big spotlight, aides held a practice session with the president earlier this week.

In one of the president’s few extended and open-ended sessions with the media before Thursday, an interview with ABC News, Americans gained insight into his thinking about Russian President Vladimir Putin — Biden called him a killer who “will pay a price” for U.S. election interference — as well as the surge of young migrants at the border, a possibly delayed troop withdrawal from Afghanistan, and more.

Eisenhower’s news conference Jan. 19, 1955, was one benchmark among several in the history of presidential news conferences tracked by Kumar, an authority on White House practices.

Until his administration, the news conferences were off the record, meaning presidents gave the public information about the country’s affairs and the workings of government without necessarily letting their name be used.

Woodrow Wilson gave the first presidential news conference in 1913. Calvin Coolidge made a habit of them, holding nearly 73 a year on average, explaining “the people should have a fairly accurate report of what the president is trying to do.”

Franklin Roosevelt, a radio pioneer who mastered communications on all fronts and nearly matched Coolidge’s unrivaled pace of news conferences, regularly summoned his favored reporters to his office, consigning the ones he didn’t like to his “dunce club.”

Off the record often meant giving the president a chance to clean up his remarks, unheard of today. At a March 1950 news conference, Harry Truman declared that Sen. Joseph McCarthy, the audacious canceler of communists real and imagined in U.S. government and society, was the Kremlin’s “best asset.”

“When one of the reporters commented that the president’s observation would ‘hit page one tomorrow,’ Truman realized he had better soften the statement,” Kumar writes. “He ‘worked’ with reporters and allowed the following as a direct quotation: ‘The greatest asset that the Kremlin has is the partisan attempt in the Senate to sabotage the bipartisan foreign policy of the United States.’”

Such manipulation became untenable when Eisenhower put the news conferences on the record and let broadcasters record them. Even so, segments were only televised later.

Although wanting to take advantage of the nascent medium of TV, Eisenhower did so with a partial step. Press secretary James C. Hagerty told AP at the time that live telecasts would not be allowed.

It was John F. Kennedy who ushered in the age of live, televised news conferences, and he thrived in the practice.

But for all of JFK’s charms and smarts, he encountered a more aggressive White House press corps, Kumar says. In part that was because the previous administration had been caught in a lie, at first telling Americans the Soviets had shot down a U.S. weather plane when it was a spy plane. Even so, open secrets about Kennedy’s behavior with women and his health problems stayed off limits in the coverage.

Through the cascade of lies about Vietnam and Watergate, the adversarial relationship between the press and power took deeper root. So did the performative nature of the exercise, with the cameras watching.

Ronald Reagan also favored the big audiences and cachet of prime time, using the glamorous East Room as the backdrop just as Nixon did.

Through these years news conferences became as much about watching a president think on his feet as about the policy substance, if not more.

There’s been preening — think Trump. Think, for example, of the haranguing, hourlong or longer theatrical, stream-of-consciousness monologues as that president searched openly for friendly questions, ridiculed tough ones and peddled theories based on things he saw on TV.

There’s been squirming, as when Gerald Ford was asked whether his pardon of Nixon should be taken to mean the disgraced president was guilty. “Uh, the acceptance of a pardon,” Ford said very slowly, “uh, I think can be construed by many if not all as an admission of guilt.”

There have been plenty of flashes of anger.

Obama in 2015 didn’t take kindly to being asked why he was “content” to trumpet the newly achieved nuclear deal with Iran when that country was still holding four Americans on fabricated grounds. His face wore a smile that wasn’t a smile.

“The notion that I’m content, as I celebrate with American citizens languishing in Iranian jails,” he said, “that’s nonsense and you should know better.”

The long-ago question that Eisenhower found “loaded” in the Indian Treaty Room of the sprawling executive office building that now bears his name was innocuous by today’s standards. He was merely asked if he might appraise his first two years in office and “tell us something of your hopes for the next two or maybe even the next six.”

Contrast that with a Feb. 6, 1998, Clinton news conference the month after he lied in a televised speech that “I did not have sexual relations with that woman, Miss Lewinsky,” as the evidence built for his impeachment that fall.

He was asked in that news conference at what point he might decide the crisis was too much to put his family through anymore and resign.

Clinton was flanked by the British prime minister, Tony Blair, who smiled the smile of a man who wanted to be somewhere — anywhere — else in that moment. 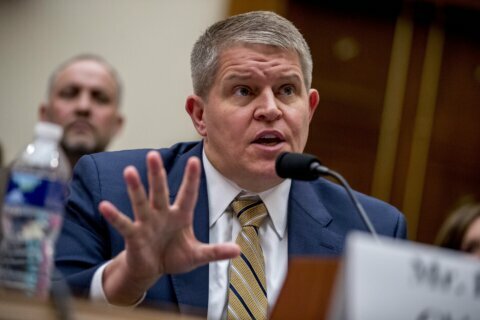 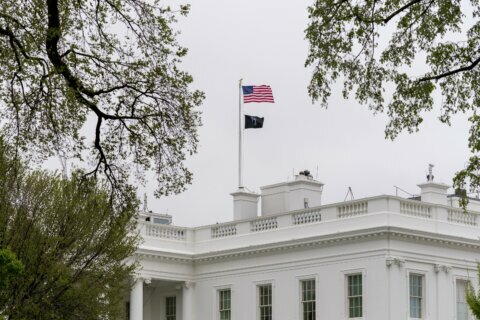