President Trump touted his administration’s record and bid Americans farewell in a brief speech at Joint Base Andrews before leaving Washington, D.C., on Air Force One for his final flight as president.

“We’ve accomplished a lot,” he said, adding, “What we’ve done has been amazing by any standard.”

Mr. Trump went off script from his prepared remarks, failing to mention President-elect Joe Biden and Vice President-elect Kamala Harris by name, something he has yet to do. He did, however, “wish the new administration great luck and great success,” and he told a crowd of supporters assembled at Joint Base Andrews to see him off, “I think they’ll have great success. They have the foundation to do something really spectacular.”

He also said, “I hope they don’t raise your taxes, but if they do, I told you so.”

His delivered his farewell remarks hours after he had pardoned 73 people, including his former chief strategist, Steve Bannon, and rapper Lil Wayne, and commuted the sentences of 70 others. 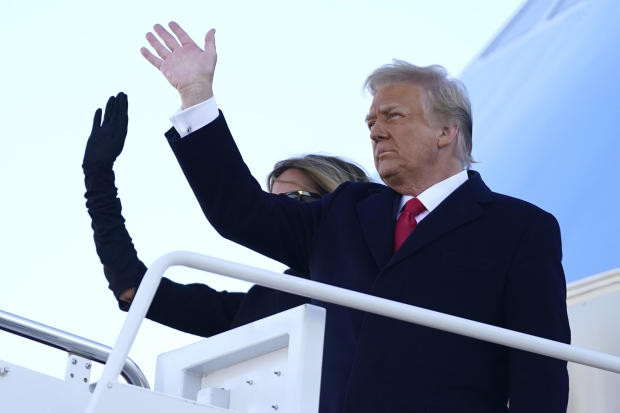 President Trump and first lady Melania Trump board Air Force One at Andrews Air Force Base on January 20, 2021.

Several hundred people assembled at Joint Base Andrews near Air Force One for the remarks, including Jared Kushner, Ivanka Trump, Donald Trump Jr., Eric Trump, Lara Trump and Tiffany Trump. As the president spoke, the crowd chanted, “Thank you, Trump.”

He highlighted the work of his administration, including the development and distribution of coronavirus vaccines through Operation Warp Speed. Mr. Trump spoke of the pandemic as if it were in the past, saying, “as bad as the pandemic was,” as 400,000 Americans and counting have died. With the vaccine, he predicted, coronavirus numbers should “skyrocket downward.”

“We have worked hard. We left it all — as the athletes would say — we left it all on the field,” Mr. Trump said.

Mr. Trump concluded his remarks by saying, “Have a good life. We will see you soon.” 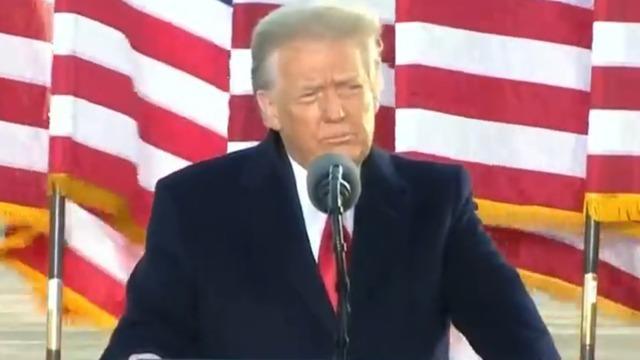 Trump says “we will be back” in farewell spee…

“He said, ‘I really don’t know the lay of the land here,’ and he’s looking for some lawyers,” Graham said. “I’m trying to help him there, and he’s just trying to put together a team.” 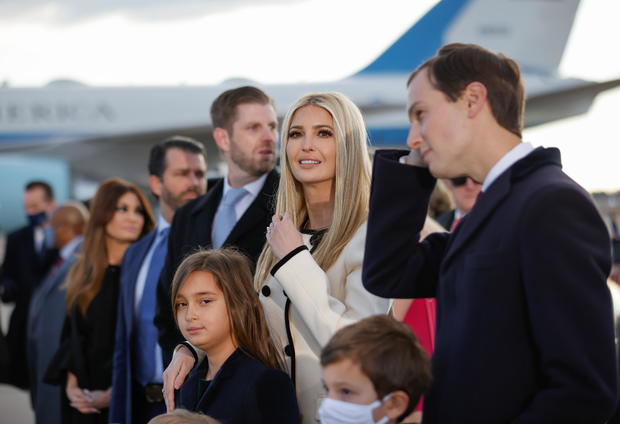 Ivanka Trump and family members attend the departure ceremony of President Trump at the Joint Base Andrews on January 20, 2021.

Bucking the long tradition of attending his successor’s inauguration, Mr. Trump landed at Palm Beach International Airport while the inauguration ceremony was taking place at the Capitol. There was no fanfare at the airport for Mr. Trump’s arrival — just about 15 people in Trump gear who watched Air Force One land.

He pulled up to his home at Mar-a-Lago at about 11:30 a.m., still officially the president for about 30 minutes longer, until Mr. Biden was sworn into office. The pool of reporters that covered Mr. Trump as president remained outside the resort until 12:01 p.m. and then drove away — shortly after Mr. Biden officially became president.

Snubbed as Obama high court pick, Garland in line to be AG

Biden faces the $1.9 trillion question: Is it too much?