President Trump offers himself as ‘the chosen one’

WASHINGTON (AP) — King of Israel? The second coming? The chosen one? President Donald Trump is known to have a…

WASHINGTON (AP) — King of Israel? The second coming? The chosen one?

President Donald Trump is known to have a healthy ego. But a string of comments Wednesday went to a higher level.

First, Trump thanked conservative radio host and supporter Wayne Allyn Root for his praise. In a tweet, Trump quoted Root calling the president “the best president for Israel in the history of the world” and claiming Jewish people in Israel love Trump “like he’s the King of Israel. They love him like he’s the second coming of God.”

The messianic imagery may have stuck in Trump’s head. Later in the day, as the president was defending his trade war with China, he cast himself as a reluctant warrior. Somebody had to do it and he was the one, he told reporters.

“I am the chosen one,” he said, turning and looking up to the sky. “Somebody had to do it.” 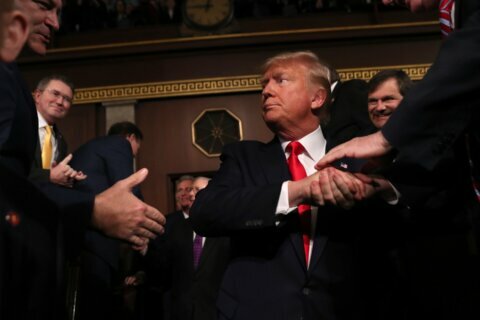