WASHINGTON (AP) — Somehow, some day, the nasty deadlock between President Donald Trump and congressional Democrats that’s shuttered federal agencies for a record-tying 21 days will end. The only real questions are when, how and who will be crowned the winner in public opinion polls and ultimately by voters.

Things got bleaker this week when House Speaker Nancy Pelosi, D-Calif., told Trump at a fiery White House meeting that Democrats would not bow to his demand for $5.7 billion to start building a wall along the border with Mexico. Trump slammed his hand on the negotiating table and stormed out, Democrats said. Trump said he calmly left the room, saying, “Bye-bye.”

A look at how the impasse might be resolved:

A: None is easy. Trump’s conservative base strongly backs his fight for wall money, even if it has meant a partial government shutdown. Democrats’ liberal stalwarts just as ardently oppose giving in. Trump and Democratic leaders have been so insistent on not surrendering that each would risk rebellion by supporters if they agreed to something viewed as a capitulation.

Q: What’s the likeliest way out?

A: Increasingly some people think that could be for Trump to declare a national emergency. By law, that could give him authority to use some money in the military’s budget for construction projects for the wall.

It’s a tactic that could let each side claim a partial victory and move on.

Trump could argue he did secure money for the wall, his most memorable campaign pledge, and overcame Democratic objections. Democrats could say they didn’t give in and they could file suits to block the move, claiming Trump had exceeded his authority by stretching the meaning of emergency. Trump could decide to finally sign bills reopening the government.

Leaving the White House Thursday to visit the southwestern border, Trump strongly suggested he would take that route. “I have the absolute right to declare a national emergency,” he told reporters. He added: “If I have to, I will. I have no doubt about it.”

A: Plenty of people on both sides hate the idea, and its legality in this instance is questionable.

Some Republicans, including Texas Rep. Mac Thornberry, the top Republican on the House Armed Services Committee, say strengthening border infrastructure is not the military’s job and they oppose siphoning defense dollars for that purpose. Many Republicans worry that by stretching the definition of “emergency,” Trump opens the door to a future Democratic president circumventing lawmakers in ways the GOP would oppose.

Democrats would consider the move a fresh example of Trump abusing his authority as president. They say it would be a ploy to bypass Congress and that there’s no emergency on the border, where the number of illegal crossings has fallen in recent years.

While the law doesn’t clearly define a national emergency, some experts say a declaration here would be unwarranted.

“The idea was that the executive would have these powers on a limited basis for true emergencies,” said Andrew Boyle, who studies presidential emergency powers at the Brennan Center for Justice, which is affiliated with New York University. He said declaring a national emergency at the border would be “clearly in bad faith.”

Q: Polls show the public blames Trump more than Democrats for the shutdown. Will Republicans fold?

A: Some GOP lawmakers have had enough, especially in the Senate. Reflecting that, a group of GOP senators has talked to Senate Majority Leader Mitch McConnell, R-Ky., and White House officials about forging a compromise, though that seems an uphill battle.

Ultimately McConnell, a tough partisan also renowned for ending previous battles by cutting bipartisan deals, will decide the GOP’s path. It will take more than a few Republican defections for McConnell to abandon Trump.

Ever since Trump reversed himself and turned down an agreement to avoid the shutdown before Christmas, McConnell has stepped aside, saying Trump and Democrats should bargain.

Democrats have been trying to pressure McConnell, quoting his past ridicule of shutdowns and citing the damage the current one is inflicting on voters. With hundreds of thousands of federal workers due to miss their first paychecks Friday and constituents complaining about losing government services, pressure will only intensify.

“I think public sentiment weighing in on his members” will change his mind, House Speaker Nancy Pelosi, D-Calif., said in a brief interview. “He’s a legislator.”

Q: What about Democrats?

A: They’ve shown no outward signs of divisions. If anything, Trump’s recent actions — leaving Wednesday’s negotiating session, seeming to blame Democrats for the recent deaths of two Guatemalan children in U.S. custody — have united them more.

A: That seems increasingly unlikely. Sen. Lindsey Graham, R-S.C., and other Republicans have explored a compromise that might include border security money plus helping hundreds of thousands of young immigrants who arrived in the U.S. illegally as children stay in this country. But Vice President Mike Pence and Graham reported no progress after a meeting Thursday.

Democrats know a deal with Trump could alienate liberals, and are loath to show Trump that they would fold during future confrontations.

They also don’t trust him. Pelosi said Trump has moved the goalposts so often that “pretty soon these goal posts won’t even be in the stadium.” 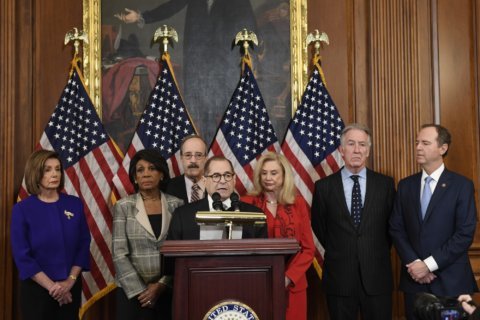