The polar vortex has become synonymous with winter’s most brutal cold. For days, the weather system has been sitting and spinning right along the U.S.-Canada border, with temperatures as low as 43 degrees below zero in northern Minnesota.

But now, there are signs it is about to surge south, bringing with it record-shattering cold air from the far reaches of Alaska and Northern Canada. By the weekend, temperatures in Kansas City and St. Louis will be below what’s normal for Fairbanks, Alaska.

Ahead of this Arctic blast, there will be a series of winter storms along the collision zone of cold and warm air, bringing ice from Texas to Tennessee and significant snow to Washington, D.C.

The polar vortex is a sprawling area of cold upper-level low pressure that typically resides in the Arctic. But every so often, the normal winter pattern becomes disrupted, splitting the polar vortex and sending pieces flying in different directions. One of those pieces is sitting just north of the U.S.-Canada border.

This bitter airmass landed there because of a phenomenon called a sudden stratospheric warming, a natural event that occurs 50,000 to 100,000 feet above the Arctic every couple of years, throwing weather patterns off-kilter. This event is often followed by a mountain of unusually warm air near the Arctic circle that acts to reroute pieces of the cold polar vortex southward. 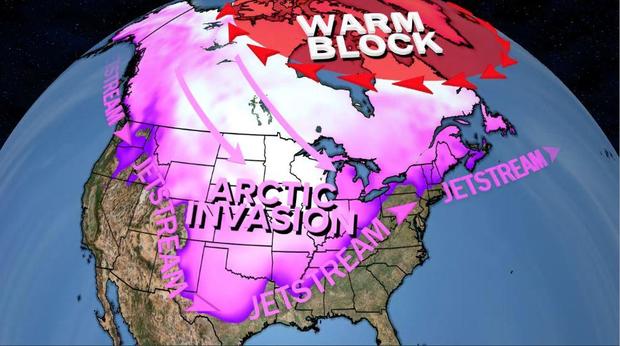 This type of pattern creates extremes all over the world. For the past couple of weeks, instead of a gradual temperature gradient around the Northern Hemisphere, there have been pockets of extreme cold intermixed with record warmth.

As a result, temperatures on Tuesday dropped to 43 degrees below zero Fahrenheit in Cotton, Minnesota, which was 133 degrees colder than the hottest temperature in the U.S. — 90 degrees — in south Florida.

In a bout of weather whiplash, the bitter cold comes on the heels of one of the top 10 warmest Januarys on record in the U.S., with the highest departures from normal right where the coldest air is now.

And the most frigid air has yet to invade the U.S. Currently, record-setting high pressure, which is associated with the coldest airmasses, is building in Alaska and western Canada. It’s so cold in Saskatchewan, Canada, that residents are pulling out the old bucket of water trick, when water instantly freezes into ice crystals when it hits the air.

This most frigid airmass will begin it’s move southward, down the east slope of the Rockies on Friday. Temperatures this Valentine’s Day weekend will be 40 to 50 degrees Fahrenheit below normal throughout the middle of the country.

From Friday through Monday, more than 100 record low readings will be in jeopardy in the heartland, with temperatures as low as 40 degrees below zero in the northern Plain States and wind chills as low as 60 below on Sunday morning. 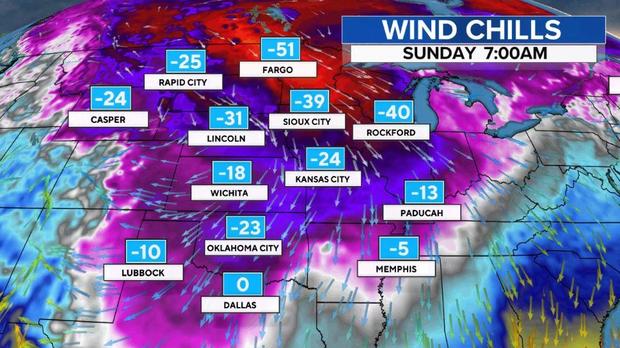 Temperatures will drop to near zero as far south as North Texas. On Sunday, temperatures in Kansas City and St. Louis, Missouri, will not climb out of the single digits, colder than the normal high temperature of 7 degrees in Fairbanks, Alaska, this time of year.

Extreme cold will not be the only hazard. Disturbances will ride along the frontal boundary separating bitter cold to the north and warm, moist air to the south. From Wednesday through Friday snow, ice and rain will straddle the boundary, with some areas from Dallas, Texas, to Little Rock, Arkansas, to Lexington, Kentucky, getting a glaze of treacherous ice.

Washington, D.C., will be just north of the front, and for the nation’s capital, that means mainly snow. From Wednesday afternoon through Friday morning, the area will pick up an extended period of intermittent light to moderate snowfall. In total, from West Virginia to Roanoke and Northern Virginia a general 5 to 10 inches will accumulate. 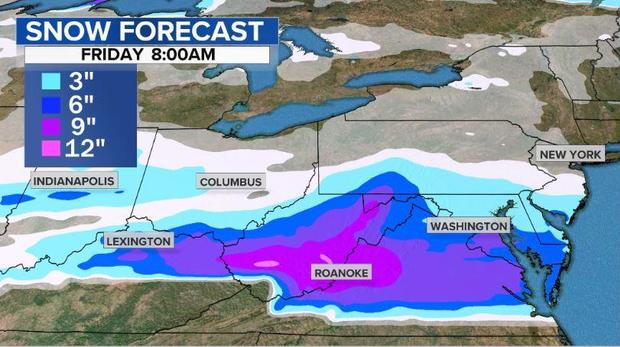 Further north in New York City, the cold-dry airmass will block the storm system, keeping it to the south. While snow showers will fly on Thursday and Friday, they will not amount to much. That is, until Sunday, when a stronger storm looks to take aim at the rest of the Northeast. If it materializes, another significant snow and ice storm may be in the cards. 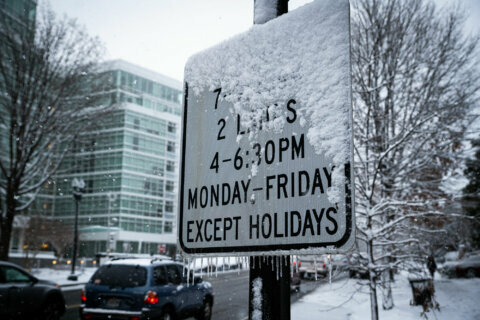