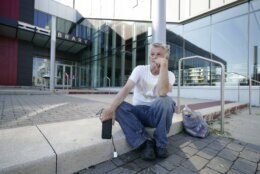 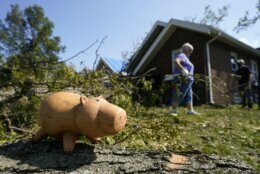 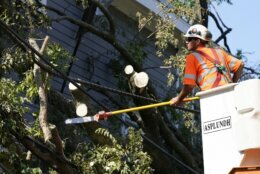 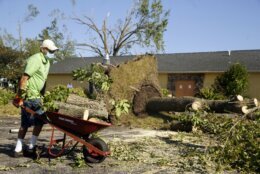 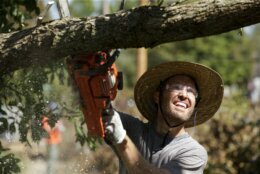 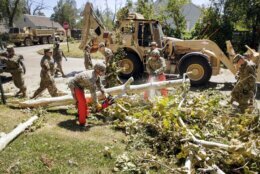 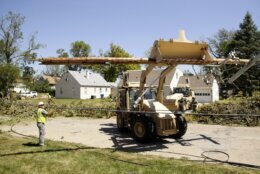 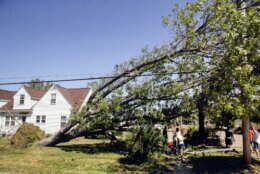 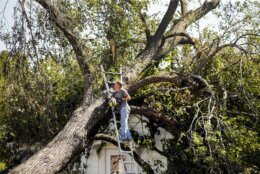 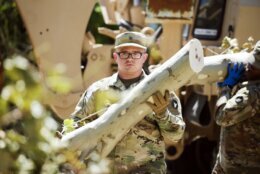 DES MOINES, Iowa (AP) — The unusual wind storm that damaged farms, homes and cities across the Midwest this past week could offer lessons for forecasters and the public on how to better prepare for something that packed the power of a category 3 hurricane but lacked the days of warning a typical hurricane offers.

The land hurricane, known as a derecho, caught farmers in fields, bicyclists on trails and travelers on highways — unaware that a series of thunderstorms that had formed the night before in South Dakota had picked up strength as it moved across Nebraska.

At least three people in Iowa and one in Indiana were killed, including a bicyclist on a trail and a woman sitting on her front porch — both struck by trees.

Forecasters had predicted thunderstorms and in some communities tornado sirens sounded 20 to 30 minutes before the winds began. But for many people, there was no sense that the day would be different from any other muggy Monday in August.

Farmer Dave Struthers was driving to his parents’ farm a few miles away when waves of blinding rain and a wall of wind nearly pushed his pickup off the road.

“I sure didn’t hear anything about it,” he said. “It blew strong for 10 or more minutes. Just solid. It just kept going.”

His corn crop was damaged, and he lost two 8,000-bushel corn storage bins and seven hog buildings. His 800 animals are now staying at his sister’s farm.

Eric Fish, 33, was napping at his Cedar Rapids home when the wind began to blow. He said he didn’t hear any sirens and didn’t have time to get to the basement. He took cover in a closet. “I felt like I was going to die alone,” he said.

Fish hopes forecasters and local officials can find a better way to warn people about such major storms.

Scientists say it’s difficult to give advance warning about a derecho because, unlike a more distant hurricane forming over the ocean, its formation is not readily apparent.

Even had forecasters provided warnings, it’s not clear it would have made a difference. Thunderstorms and tornadoes are common in the Midwest, and many residents are desensitized to severe weather warnings.

The National Weather Service and the National Oceanic and Atmospheric Administration are working on tools that would assist forecasters in making predictions that consider a range of possibilities. In the future, a forecast for the next day might say that a thunderstorm is a likely scenario, with a chance for a derecho given the right conditions, Marsh said.

Scientists now believe Monday’s derecho traveled 1,000 miles (1,610 kilometers) from South Dakota to northwest Ohio. It appears the storm began picking up strength in Nebraska, gaining power as it moved across Iowa before weakening as it approached Ohio.

Marsh was working the forecast shift at at the Storm Prediction Center Sunday night and acknowledges that all the weather prediction models suggested the storms would move east with no immediate sign they would be as intense as a derecho.

“Obviously the fact that it happened, it should have been in the realm of possibility and we need to continue to work to evolve our tools to be able to identify the entire range of possibilities,” Marsh said.

More typical thunderstorm development clusters work like a group of people in a rowboat rowing erratically and the boat just spins around. There is some propulsion in one direction, but it doesn’t really go anywhere, Marsh said.

“What happened on Monday was everything was working in concert with one another and you got this feedback mechanism where it allowed the air to accelerate, surge out, strengthen and push across Iowa recording the winds that you saw,” he said.

A wind gust of 112 mph (180 kph) was recorded north of Des Moines, placing the storm at the strength of a category 3 hurricane. The extensive damage to power lines, buildings and crops was because the winds were prolonged.

Jerry Frajman, 66, said more notice might have allowed people to board up homes and businesses and stock up on food. He was on a city bus in Cedar Rapids when storm sirens started blaring. Frajman said he has been living only on snack food for days.

“It’s been a hectic week for everybody,” he said.