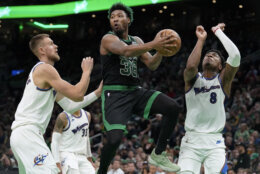 Jayson Tatum had 23 points, including five 3-pointers, and Malcolm Brogdon added 21 points off the bench to help Boston avoid its third straight loss.

The Celtics connected on 21 3-pointers on the night and had 29 assists on 36 made field goals.

Kristaps Porzingis scored 17 points for the Wizards, who have lost three of their last four.

Beal missed his first 11 shots and was scoreless until the third quarter before finishing with 12 points and eight assists.

With Beal struggling, Boston led by as many as 24 points in the opening 24 minutes. Washington’s starting lineup managed to connect on just 11 of its 32 field goal attempts in the half.

Beal’s first points came from the free throw line with 2:29 left in quarter. He didn’t score from the from the field until dropping in a step-back, 17-footer a few possessions later.

It also didn’t help that Sunday was Washington’s second game without one of its peskiest defenders in backup point guard Delon Wright, who could be sidelined up to two months with a hamstring issue.

Wizards: The last time Beal was held scoreless in the first half of a game was 2018 against the Warriors. … Trailed 51-27 in the second quarter before closing the half on a 20-7 run. … Have faced first- quarter deficits of at least 15 points in back-to-back games.

Celtics: Grant Williams had 10 points, four rebounds and a block in his first game back from serving a one-game suspension for bumping a referee. … Led 34-15 at end of first quarter. … Jumped out to 21-8 lead, with Tatum and Brown taking the team’s first 12 shots and combining for 27 points in the period.

Celtics: At Cleveland on Wednesday. 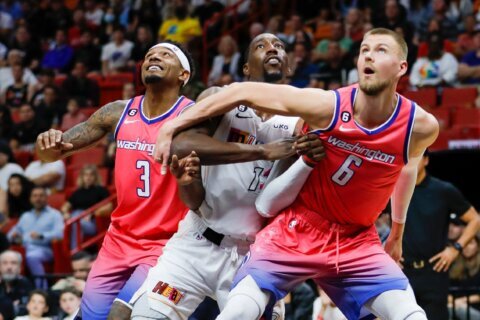 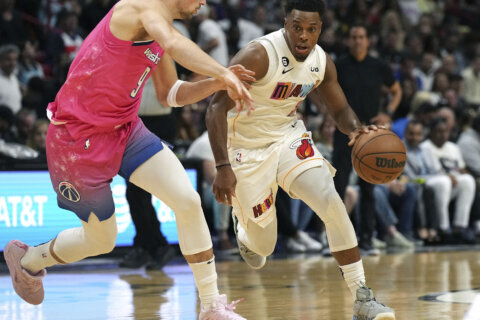