Kristaps Porzingis scored 25 points, including 12 in the third quarter as Washington took control, and the Wizards pulled away for a 132-114 win against the Minnesota Timberwolves on Tuesday night.
Listen now to WTOP News WTOP.com | Alexa | Google Home | WTOP App | 103.5 FM
(1/10) 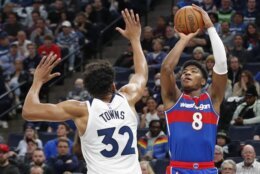 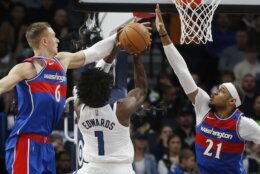 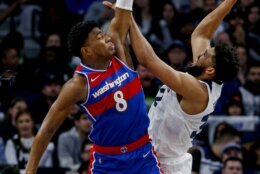 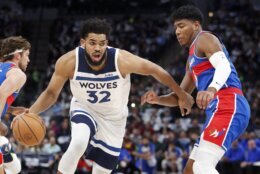 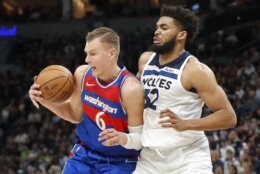 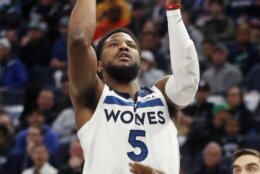 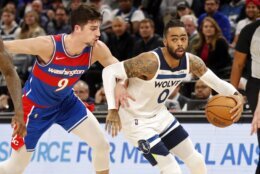 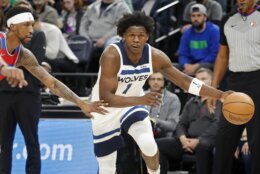 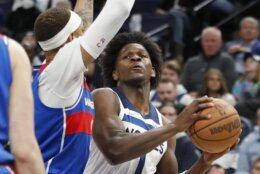 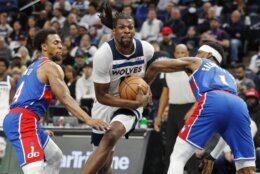 MINNEAPOLIS (AP) — Kristaps Porzingis scored 25 points, including 12 in the third quarter as Washington took control, and the Wizards pulled away for a 132-114 win against the Minnesota Timberwolves on Tuesday night.

Rui Hachimura tied a season high with 21 points and Daniel Gafford set season highs with 24 points and 12 rebounds off the bench for Washington. The Wizards were coming off a 144-102 loss at Boston to open their three-game road trip but have won five of seven.

“I think it was important for us to get that feeling back,” Porzingis said. “(Boston) was an ugly game from us, but we knew that’s not who we are and we can play at a much better level. … I think from top to bottom, we just kind of were having fun, sharing the ball, playing well.”

Karl-Anthony Towns had 26 points and 10 rebounds for Minnesota, while D’Angelo Russell finished with 17 points and 11 assists. It was a disappointing loss for the Timberwolves after returning from a four-game road trip.

Minnesota is seventh in the Western Conference, almost out of time to climb above the cut and avoid the play-in tournament with two regular-season games remaining.

“We didn’t look like a team that was trying to make the playoffs,” Towns said. “We looked a little lethargic. Can’t afford that on games like this against a team like this. It was like a trap game. I’ve been there when you’re out of the playoffs and you just want to spoil everyone’s fun. We knew what they were going to come with.”

The Timberwolves are two wins behind fifth-place Utah and sixth-place Denver. If they don’t move up, they’ll host a play-in game next week against the Los Angeles Clippers.

Washington was eliminated from playoff contention last week, but it’s been out of the mix for a while with star Bradley Beal sidelined for the second half of the season because of a wrist injury. More recently, third-leading scorer Kyle Kuzma has been absent for nine straight games with a knee injury.

The Wizards are playing spoiler just fine, though. Two of their recent wins have come against likely playoff teams in Golden State and Dallas. They beat the Los Angeles Lakers in mid-March to start their run of improved play.

Porzingis is playing a big role since he came to Washington in a trade-deadline deal from Dallas.

Midway through the third quarter, neither team had led by more than six before the Wizards put together an 18-6 run keyed by Porzingis. He hit two 3-pointers, and had a dunk and two layups during the burst.

Minnesota cut the lead to four with a run at the end of the third. But then Ish Smith hit a buzzer-beating 3 from halfcourt to end the quarter and Washington dominated the fourth, eventually leading by as many as 23.

“We just got out-competed,” Wolves coach Chris Finch said. “They played harder, which is disappointing given everything we have to play for.”

The Wizards had the 7-foot-3 Porzingis and the 6-foot-10, 234-pound Gafford on the court together for the first time since Porzingis was acquired, a move coach Wes Unseld Jr. has been contemplating.

“It’s something we’ve talked about, something we’ve worked on a little bit,” Unseld said. “We were able to stay organized and those guys defensively crossmatch. But overall, I thought those minutes were valuable.”

Wizards: Washington didn’t shoot a free throw in the first quarter and had only five attempts in the first half. … The Wizards set a season high with 38 assists. They have won five in a row over Minnesota.

Timberwolves: Patrick Beverley missed his second straight game with right ankle soreness. … F Jaden McDaniels returned after missing nine games with a left ankle sprain. He was on a minutes restriction and went scoreless in 14 minutes. … Towns had 15 points in the first to go with four rebounds and three assists. … Minnesota was 14 of 41 from 3-point range.

Wizards: Visit Atlanta on Wednesday. The Hawks have secured a spot in the play-in tournament with five straight wins.

Timberwolves: Host San Antonio on Thursday. The Spurs began the night with a two-game lead on the Los Angeles Lakers for 10th place and the final play-in slot in the West.