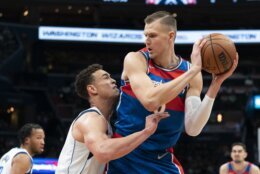 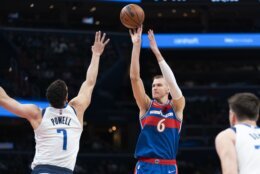 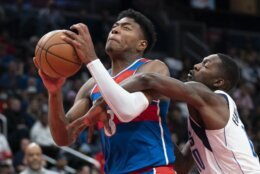 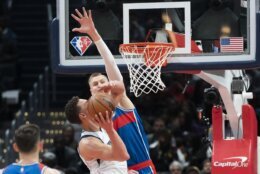 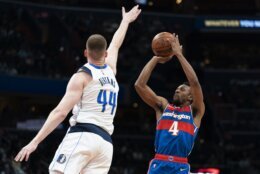 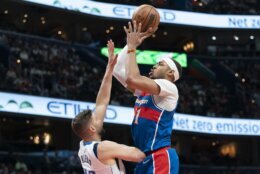 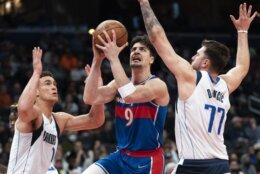 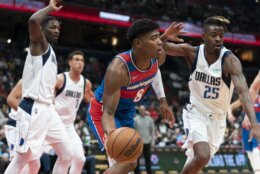 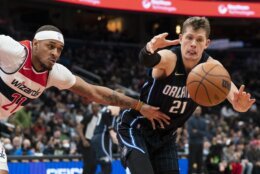 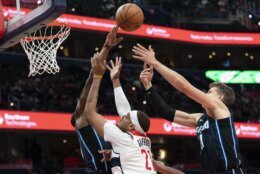 “We called up the huddle and I told him, ‘KP, since they let you go, we’re going to beat them up for you,’” Caldwell-Pope said. “That was the first thing I said to him, and we did exactly that.”

Porzingis had 24 points and nine rebounds in his first game against his former team, helping Washington roll past Dallas 135-103.

Caldwell-Pope scored a season-high 35 points and Rui Hachimura added 21 for Washington, which won for the fourth time in five games despite being eliminated from playoff contention a day earlier.

Luka Doncic had 36 points, seven rebounds and six assists for Dallas, which fell a half-game behind Golden State for third place in the Western Conference. Jalen Brunson had 21 points for the Mavericks, who fell short of moving 20 games over .500 for the first time since their 2010-11 title season.

Dallas coach Jason Kidd was ejected when he was called for two technical fouls with 8:47 remaining and the Mavericks trailing 105-85.

Washington acquired Porzingis in a Feb. 10 trade deadline deal for forward Davis Bertans and guard Spencer Dinwiddie. Porzingis averaged 20.0 points and 8.8 rebounds over parts of three seasons with the Mavericks.

“Everybody had my back today,” Porzingis said. “They knew it was — I don’t want to say it was a personal game, but it’s always fun to compete against your former team.”

Dinwiddie had eight points in 23 minutes in his first game against the Wizards since the deal, while Bertans played 10 scoreless minutes.

“He got going early,” Wizards coach Wes Unseld Jr. said of Caldwell-Pope, who was 6 of 11 from 3-point range. “He didn’t force the issue. He just took advantage of the shots that were presented to him. Once he sees a couple go in, now he’s shooting into a big basket. He’s had nights like that throughout his career.

“When you get hot like that, it’s good to take a heat check.”

The Wizards led 67-53 at the half and eventually extended their advantage to 26 after a 3-pointer by Porzingis made it 88-62. Dallas cut the deficit in half with a 16-3 run, but Washington then sealed it with a 21-7 burst that included Kidd’s ejection to send Dallas to a loss two days after it locked up a playoff berth.

“Sometimes (when you) clinch, there’s a time to relax, and I think we relaxed,” Kidd said. “We didn’t play very well. Luka scored the ball, but defensively we have to get back to the way things were before the (All-Star) break.”

Dallas was without Gs Sterling Brown and Trey Burke, who are in the league’s health and safety protocols. G Frank Ntilikina (sprained right ankle) had two points in three minutes after missing Wednesday’s game at Cleveland.